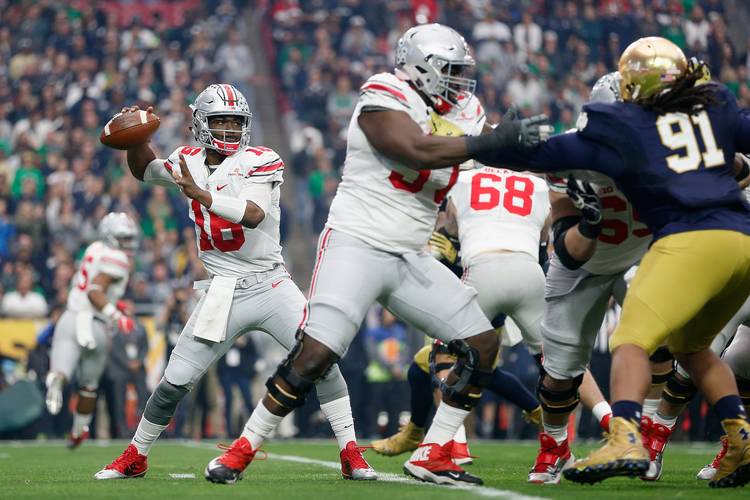 Texas coach Tom Herman hadn’t yet been on the job a day when he made his first recruiting pitch.

“I also want the high school coaches of the great state of Texas to know that this is their football program,” he said during his introductory press conference. “We’re the flagship university of the best high school football-playing state in America. I want to continue to do a great job in recruiting the fine student-athletes that are produced by our Texas high school football coaches.”

Texas high school coaches are plenty familiar with Herman. During stops at Texas Lutheran, Sam Houston State, Texas State, Rice and Houston, he recruited from within the state. At Ohio State, he plucked some of the best talent Texas had to offer — at the Longhorns’ expense.

Now, he’s hoping to keep all of those programs — and everyone else — away from the state’s best high school players. These five are proof he can do it.

Never underestimate what Herman will do with a third-string quarterback.

King, the No. 49-ranked recruit from Texas on the Statesman’s 2016 Fab 55, was supposed to redshirt before injuries to Houston’s receiving corps led to a change of plans. The true freshman from Manvel caught 29 passes for 228 yards.

King shined Sept. 24 at Texas State, when became the first player in Houston’s history to catch, throw and return a kickoff for a touchdown in the same game. And despite his production, Herman still maintained that his future is at quarterback.

The only player on this list not from Texas, Baugh has emerged as a key player for the No. 2-ranked Buckeyes. His size (6-foot-5, 255 pounds) and athleticism made him a 4-star prospect out of John W. North High School in Riverside, California.

Now a junior, Baugh moved into the starting lineup and has 24 catches for 269 yards and two touchdowns. And he’s hurdling guys.

On talent alone, Wilson is the second highest-rated recruit Herman ever landed during his days as an assistant coach. Wilson was a 4-star running back out of DeSoto High School near Dallas, ranked No. 70 overall and No. 9 in the state in the Class of 2013.

Injuries robbed Wilson of the career he appeared destined for after after a productive freshman season (250 rushing, 210 receiving yards), but he’s still been a factor for the Buckeyes in 2016.

When Herman arrived at Houston, he immediately laid out a plan to keep Houston’s best recruits home. Sound familiar?

That was always going to difficult given Houston’s status in the Group of Five, but Herman succeeded in bringing the program its first-ever five-star when Oliver committed in May 2015. And that turned out to be more than just a recruiting win.

The No. 2-ranked recruit on the Austin American Statesman’s Fab 55, Oliver was the American Athletic Conference’s Rookie of the Year, piling up five sacks and a team-high 19 1/2 tackles for loss. Oh, and he absolutely terrorized presumptive Heisman Trophy winner Lamar Jackson.

This one shouldn’t need an introduction. Herman is the coach who recruited Barrett, overlooked by Texas, to Ohio State. According to Jim Garfield, Barrett’s coach at Wichita Falls Rider and the current coach at Elgin, the quarterback committed the summer prior to his senior year.

Herman had called to check in with Garfield, and Barrett asked for the phone.

“He got on and said, ‘Hey, this is J.T. I wanted to tell you something. Every night I go to bed thinking about what color uniform I’m wearing when I’m winning the national championship,'” Garfield recalled last month in his office. “‘Every night, it always comes to Ohio State.'”

If Herman can help it, recruits across the state will be dreaming in burnt orange and white very soon. Ohio State fans are already concerned.