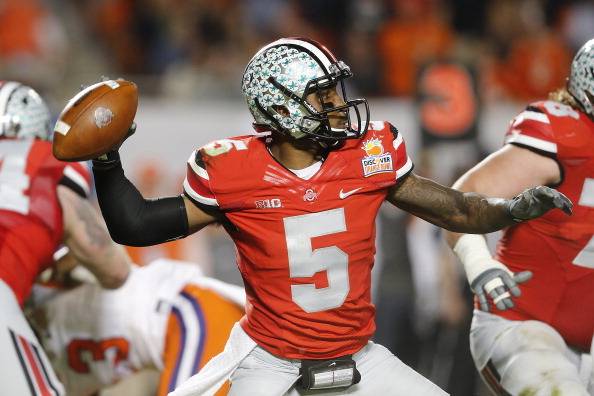 MIAMI GARDENS, FL - JANUARY 3: Braxton Miller #5 of the Ohio State Buckeyes throws the ball against the Clemson Tigers during the 2014 Discover Orange Bowl at Sun Life Stadium on January 3, 2014 in Miami, (Photo by Joel Auerbach/Getty Images)

Tom Herman is the new coach of the Texas Longhorns, and he takes over a roster built by back-to-back strong recruiting classes. He inherits a team with a freshman quarterback who started every game this season for the Longhorns, the return of several high-level defenders and a possibly an All-American offensive lineman.

But who are the best quarterbacks Herman has ever coached in his career? As the offensive coordinator at Ohio State from 2011 to 2014, and before that stops at Iowa State, Rice, Texas State and Sam Houston State, he’s had his fair share of talented players. And Texas fans are always looking for the next Vince Young and Colt McCoy.

Here are the five best quarterbacks Tom Herman has ever coached.

During his three seasons coaching under Paul Rhoads in Ames, Herman helped Arnaud become the Cyclones’ No. 2 all-time passer with 6,777 yards and 42 touchdowns. His 8,044 yards of total offense is second all-time in school history. Interesting thing about Arnaud: he was recruited to Iowa State by head coach Dan McCarney, who was fired and former Texas defensive coordinator Gene Chizik became the coach. Then Chizik left after two seasons and Rhoads took over. Herman was Arnaud’s third offensive coordinator.  Arnaud threw 42 touchdown passes in his three seasons with Herman.

The 2008 Conference USA Most Valuable Player, Clement threw 99 touchdowns in his career at Rice. Clement and his receiver Jarrett Dillard connected 51 times for touchdowns during their career.  While Herman was at Rice, the offense broke close to 40 passing records. Clement led the Owls to the 10th-best total offense in 2008. Herman was only at Rice for two seasons before moving to Iowa State. Clement finished with 125 career touchdowns.

The Buckeyes lost star quarterback Braxton Miller at the start of the season and went to freshman quarterback, and Texas native, J.T. Barrett, at quarterback. All the Ohio State record-breaker did in his first year was throw 34 touchdown passes, rush for 11 more and complete 64 percent of his passes. He had 2,834 passing yards. Simply put Barrett was awesome. He was injured against Michigan and Cardale Jones took over and won the Buckeyes a national championship, but since then (and after Herman left), Barrett has become one of the greatest quarterbacks in Ohio State history, holding the record for most career touchdowns, most career passing touchdowns, most total offense in a single season, most touchdowns in a single game and a handful of other awards. Two things: Barrett’s best season was the one under Herman, and he still has one more year of eligibility. Yikes.

Like Miller, Arnaud and Clement, Ward was already on campus when Herman arrived as the head coach of the Houston Cougars. But needless to say, he really took off under Herman. Ward started eight games as a sophomore, then Herman became the head coach and he wound up winning the MVP award of the 2015 American Athletic Conference Football Championship game. He was named the offensive player of the game of the 2015 Chick-fil-A Peach Bowl against Florida State. This season Ward has thrown for 3,328 yards with 22 touchdowns and with rushed for 518 yards with nine touchdowns. The body of work over the last two seasons puts Ward near the top of this list.

The first quarterback Herman coached at Ohio State won back-to-back Big Ten Most Valuable Player awards and was a two-time first-team all-Big Ten quarterback. He won the Big Ten Offensive Player of the Year in both of those seasons and entered the 2014 season as one of the favorites to win the Heisman Trophy. But a season-ending injury prevented him from playing a down in 2014. Before that though, Miller  was outstanding under Herman. In 2012, his first under Herman, he threw 15 touchdowns, totaling 2,039 passing yards. He rushed for 1,271 yards and 13 more touchdowns. Ohio State went undefeated but were still under a postseason ban. In his junior year in 2013, Miller threw for 2,094 yards and 24 touchdowns. He rushed for 1,068 yards and 12 touchdowns. Miller moved to wide receiver in 2015, his senior year, and finished his career with 5,295 yards and 52 touchdowns and just 17 interceptions.