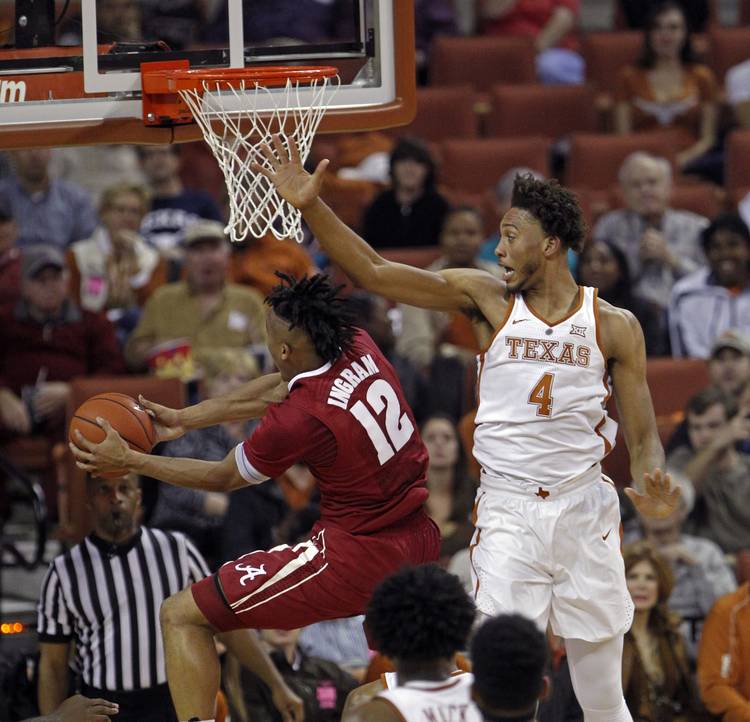 Texas center James Banks (4) goes up to block the shot of Alabama guard Dazon Ingram (12) during the first half of an NCAA college basketball game, Friday, Dec. 2, 2016, in Austin, Texas. (AP Photo/Michael Thomas)

It’s hard to believe that any basketball team could face a must-win situation on Dec. 2. But for Texas, Friday’s game against Alabama certainly qualified.

The Longhorns snapped themselves out of a mid-game funk, erased a 12-point deficit with hustle and grit and captured a 77-68 victory over the Crimson Tide at the Erwin Center. Five UT players finished in double figures with Kerwin Roach Jr. leading the way with 16.

Over the last four minutes, a respectable crowd was standing, cheering and treating this like a do-or-die Big 12 Conference matchup. Alabama was picked to finish seventh in the SEC this season and certainly looked stout by taking a 38-26 lead at the break.

Horns down Bama. What a game! #HookEm 🤘 pic.twitter.com/hx2kVAkbNg

But Texas (4-3) came out with more fire after halftime, hustling around and showing no lingering effects of a sloppy, embarrassing loss to UT-Arlington last Tuesday. The Longhorns outscored the Tide 51-30 in the second half and shot 56.7 percent in a 20-minute span where it was obvious something clicked.

Freshman Jacob Young shot a 3-pointer from the left corner that hit the side of the backboard. But he set up shop in the exact same spot late in the second half and drilled one that gave Texas a 65-63 lead with 3:38 remaining.

Andrew Jones followed with a layup, giving the Horns a four-point cushion. At that point, you could see at least one Tide player had his shoulders slumped jogging the other direction.

Tevin Mack showed the most hustle last Tuesday, and he was at it again against Alabama. He tied things up at 47-47 with a run-out bucket off a turnover. Then, Mack was in the right place at the right time for another layup. He tipped a ball away with his off hand and flipped the steal to Jacob Young, who scored after a spin move. Mack finished with 11 points on 5 of 12 shooting and had seven rebounds.

The Longhorns have no true point guard, and that’s crystal clear when you look at the assists. With four minutes left in the game, Texas had just nine assists on 23 made field goals. Also, the Horns need to work on those clutch free throws. At one point, Texas was 12 for 15 from the line. Allen and Roach both missed some free throws down the stretch, but Allen then hit two and Andrew Jones connected on two more to give UT some cushion. The Horns finished the game 22 for 30 at the stripe.

Shaq Cleare has worked on that baby hook shot for years. Experimented with it, polished it and tinkered with it some more. Finally, all that work elbow grease and time spent in the gym paid off. Cleare got multiple little jumpers to fall in one of his best games as a Longhorn. He finished with 11 points and four rebounds in 23 minutes.

After a stunning loss to UT-Arlington and several days of introspection, Texas should have come out raring to go. But Alabama got off to a 10-2 start thanks to Corban Collins’ 3-pointer and a nasty one-handed jam by Braxton Key. Riley Norris hit two mid-range jumpers, and Dazon Ingram slipped a ball to Shannon Hale for a 23-14 lead.

It only gets tougher from here. Texas now goes on the road for a Tuesday game at Michigan, a team that’s 5-2 going into Saturday’s game against Kennesaw State. Coach John Beilein’s club has stumbled against South Carolina and Virginia Tech. Guard Derrick Walton Jr. is shooting a career-high 42.6 percent from 3-point range, and Zak Irvin is averaging 14.3 points.

WATCH: Postgame interviews from the Longhorn’s latest win over Alabama