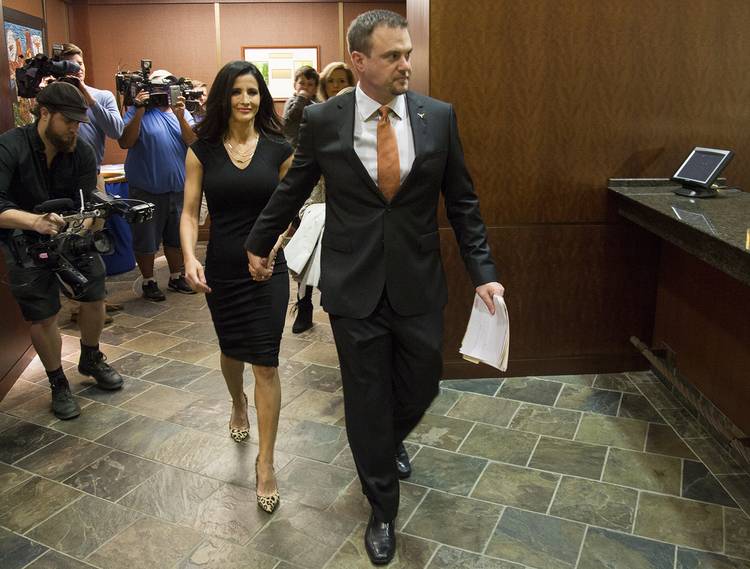 Tom Herman and his wife Michelle make their way into a preconference in the Carpenter-Winkel Centennial Room of the Belmont Hall on Sunday, November 27, 2016. RICARDO B. BRAZZIELL/AMERICAN-STATESMAN

Tom Herman’s arrival at Texas means there is a new first lady of Longhorns football.

If her Twitter feed is any indication, Michelle Herman isn’t one to just sit back and watch. And that’s definitely a good thing. Let’s take a look back at her first week as 40 Acres royalty.

On Sunday, after the Hermans’ move to Austin had become official and before her husband’s introductory press conference, Michelle Herman reminded the world that she’s been with Tom the whole way.

From Seguin, Texas, to Austin, Huntsville, San Marcos, Houston, Ames, Columbus, back to Houston and now Austin, the pair’s journey has been anything but easy. It was even the subject of a Sports Illustrated profile back in November.

“Her support, love and understanding are the main reasons why we are where we are today,” Tom Herman said. “None of this would be possible without her.”

Things will be a little different for the Hermans this time around in Austin. The life of a graduate assistant may not come with as much pressure, but it also comes with far less money. A friend reminded Michelle Herman of those humble beginnings, to which she responded:

Thank you MeSo😘 I don't even want to think of that apt. https://t.co/SQZvvke3Lr

This week also happened to be Michelle’s birthday.

Despite their transient journey, the Hermans have forged plenty of relationships along the way. During two seasons at Houston, Tom Herman changed the culture of the football program. Back in October, he tweeted a photo with the hashtag “#HTownIsOurTown.” Michelle re-tweeted it.

Their move to Austin came with some criticism. Some in Houston questioned Tom Herman’s integrity. On Twitter, Michelle Herman didn’t back down. Check out this spat she had with former Houston radio personality Nick Wright:

Just like Michelle Herman has her husband’s back, his former players have hers. It’s been almost two years since the Hermans left Ohio State, but Buckeyes quarterback J.T. Barrett and former Ohio State QB Cardale Jones were among those who defended the Hermans.

You can sense a genuine relationship here:

I ❤️ you always! https://t.co/uZa0sgtBIw

Much like her husband, Michelle Herman learned from one of the best while living in Columbus, Ohio. Buckeyes first lady Shelley Meyer has been known to ruffle some feathers on behalf of husband Urban Meyer, and fields interviews every now and then. Now that Tom Herman is under the bright lights, expect Michelle Herman to become a public figure, too.

As for how she’ll fit in around Austin, it looks like she’s off to a great start.

Just when I think Austin couldn't get any better you throw #BreakfastTacoCapitaloftheWorld at me 🤗🎉 https://t.co/hy3BYXGdNR

WATCH: Postgame interviews from the Longhorn’s latest win over Alabama

Baker Mayfield to return to Oklahoma in 2017