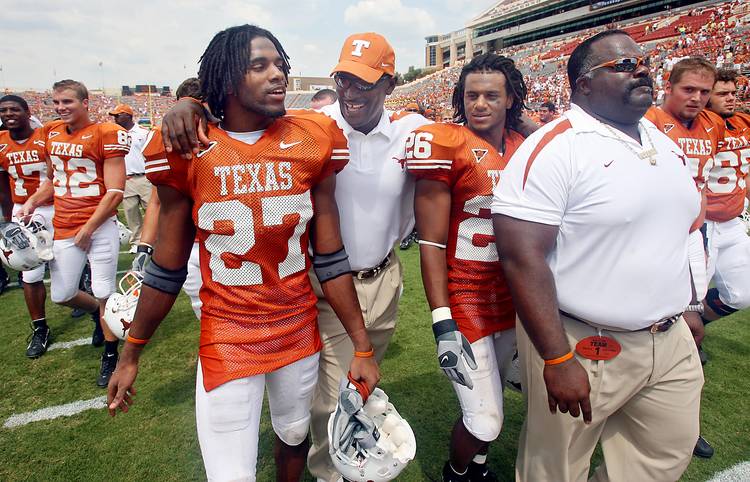 Oscar Giles is coming back to Texas, and opposing programs better get ready for Texas to start hauling in and developing defensive linemen talent.

At least that’s what history tells us.

Giles coaches defensive linemen, has been since becoming a coach following a playing career at Texas. He coached Texas defensive ends from 2005 to 2013 and was Houston assistant head coach and defensive line coach from 2015 to 2016.

Here are some of the recruits, according to 247 sports, that Giles brought in at Texas: Jackson Jeffcoat, Alex Okafor, Malcom Brown, Tim Cole, Chykie Brown (a defensive back), Sam Acho and some dude named Earl Thomas.

Here are some of the guys Giles coached at Texas, not including the the linemen he recruited: Brian Orakpo, Sergio Kindle and Tim Crowder. Orakpo and Jeffcoat won the Ted Hendricks Award for the nation’s top defensive end.

Last season he successfully recruited Ed Oliver to Houston. A 5-star recruit from Westfield High School, Oliver was one of the best freshman defensive linemen in the nation this past season. He had 61 tackles, 43 solo, 19.5 tackles for a loss and five sacks. he also had three forced fumbles.

Last year Charlie Strong signed one of the best group of defensive linemen in the 2016 class. With Giles back at Texas that may become the norm.

If you’re all for Omar Manning coming to Texas, we have a hashtag for you

Tom Herman was born in Ohio, and that’s a good thing, Texas fans