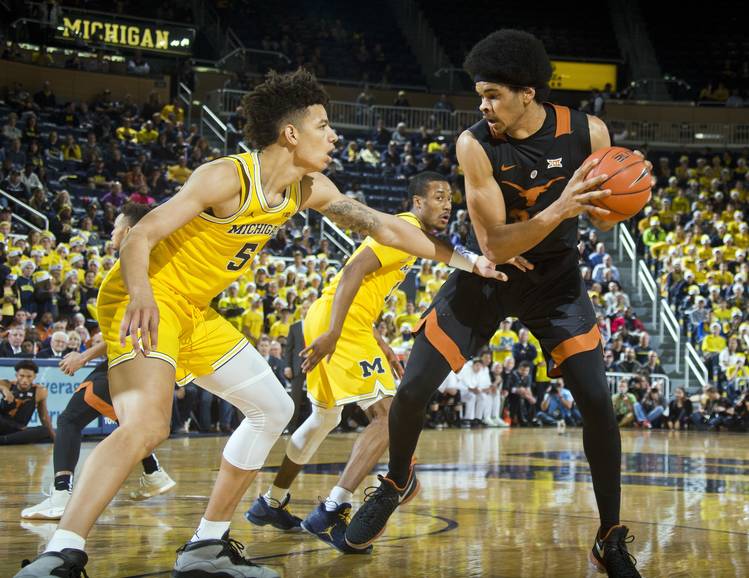 ANN ARBOR, Mich. — It could have been a pulse-pounding road victory for a young Texas team that needed a shot of confidence and adrenaline. It was, without question, a winnable game.

Instead, Michigan clogged things up for Eric Davis Jr. on his potential go-ahead shot with four seconds left, and the Wolverines grabbed the loose ball in the closing seconds for a 53-50 victory at the Crisler Center.

The Longhorns (4-4) climbed out of a 10-point hole in the first half and took a one-point lead with 14:41 left in the game. It was a seesaw battle down the stretch. Shaq Cleare hit an easy mid-range jumper, and Kerwin Roach Jr. scored in Mopac-level congestion in the paint.

Michigan’s Moe Wagner missed the second of two free throws with 55.6 seconds left, and Texas still led by one. But Roach missed another tough runner in traffic, and Michigan went the other way. Zak Irvin missed on a reverse layup, but Wagner was there for a critical putback that gave Michigan a 51-50 lead.

Tevin Mack started the year with three double-digit games and then had four uneven performances. But he was on point against Michigan, hitting three 3-pointers and finishing with 18 points. His career high was 20 points against Connecticut last season. His two made free throws with 6:52 remaining gave Texas a 46-45 advantage.

For the first time in a critical spot, Texas did well on the glass. The Longhorns won the battle on the boards 31-28. That’s with Jarrett Allen only getting four due to his foul trouble. Mack and Kerwin Roach Jr. both had five rebounds, and Davis had three more. It was UT’s difficult shooting down the stretch that spelled doom. The Horns hit only two of their final 12 shots.

The best sequence of the game came when James Banks subbed in for Allen and Cleare, who both were in foul trouble. With Banks holding down the middle, Texas found its groove. Mack hit a 3-pointer from practically downtown Detroit. Then, Jacob Young connected from long range and Andrew Jones took a Michigan turnover the other way for a tomahawk dunk. The Horns suddenly had a 40-37 lead with 14:03 remaining.

Texas coach Shaka Smart said he didn’t want to make a habit out of falling behind early. UT was down 10-2 last week to Alabama and had to dig out of a 12-point hole. Against the Wolverines, the Horns had six turnovers in the first 8 minutes, 39 seconds, and soon trailed by 10 after Duncan Robinson’s 3-pointer in the left corner capped a 9-0 run. Texas got going, though. Despite 10 first-half turnovers, it was a three-point game at the break.

The Longhorns are headed home to get ready for final exams and the end of the semester. Texas will play Long Beach State at 5 p.m. Saturday at the Erwin Center and then take a week off before playing Arkansas in Houston on Dec. 17. The 49ers are 1-9 going into Wednesday’s game, so it should be a relatively easy outing for the Longhorns.