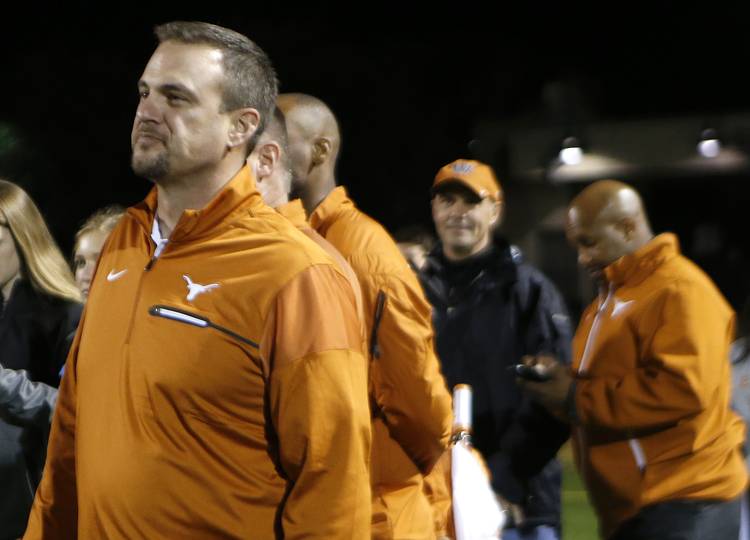 Tom Herman has appealed to Texas high school coaches throughout his first week-and-a-half on the job. On Wednesday, the Longhorns coach went straight to the source.

He addressed the Texas High School Coaches Association Board of Directors at their meeting, re-emphasizing what he said in his introductory press conference on the 40 Acres.

@CoachTomHerman to High School Coaches "Whatever you need, just let us know. Come by anytime, you are always welcome!!" pic.twitter.com/hekYz0M5JL

Happy to have @CoachTomHerman and the Longhorns are in house today meeting our THSCA Board of Directors! pic.twitter.com/X6NuHAsU46

Herman has recruited the state for almost two decades during stops at Texas Lutheran, Sam Houston State, Texas State, Rice and Houston, and even when he was the offensive coordinator at Ohio State. He’s built relationships, and now hopes to use those at Texas.

“He has a real understanding that the high school coaches are important, and I think he really reaches out to them to make them feel like they’re important,” said D.W. Rutledge, the executive director of the THSCA, upon hearing Herman’s remarks during his introduction. “Everybody that I’ve talked to that’s visited the University of Houston had nothing but good things to say.”

Herman has certainly been making the rounds over the past two weeks. Besides his most visible appearance at last week’s Lake Travis-Westlake playoff game, here is a sampling of tweets posted by recruits and coaches after receiving visits from Herman and/or his staff.

I will be signing with The University of Texas on Thursday at 11:30 at Westlake! #HookEm 🐂🤘

Thank you for stopping by today. Love you my brother @CoachTomHerman. 2 towns 2 teams 1 FAMILY pic.twitter.com/Q55TpD9LWf

Bohls: Was John Harbaugh close to becoming the head coach at Texas?