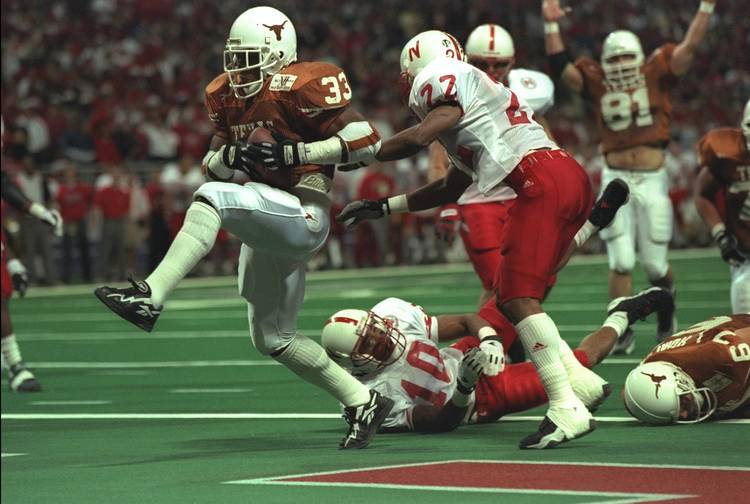 Running back Priest Holmes of the Texas Longhorns (left) runs with the ball as Nebraska Cornhuskers player Ralph Brown chases hin during the Big 12 Championship game at the TWA Dome in St. Louis, Missouri. Texas won the game, 37-27. (Getty Images)

EDITOR’S NOTE: Wednesday marks the 20th anniversary of Texas’ upset victory over No. 3 Nebraska in the first Big 12 championship game. The following story ran the next morning on Dec. 8, 1996.

ST. LOUIS — A bouquet of tulips arrived at Bellmont Hall on Thursday, addressed to James Brown, courtesy of a group of female Nebraska fans who were grateful for the Texas quarterback’s offhand prediction that his team would beat the No. 3 Cornhuskers by three touchdowns.

It came with a card that read: “Thanks for keeping us focused.”

James Brown’s reply came Saturday — a 37-27 Texas win in the inaugural Big 12 title football game that sent a figurative funereal wreath of lilies for the Cornhuskers’ bid for a third straight national title.

Texas didn’t meet Brown’s generous spread, but there’s little reason to think he’d get many complaints from the small band of Longhorns fans on hand at the Trans World Dome. Brown did his part, throwing for 353 yards, including a delicate toss to tight end Derek Lewis on a gutsy call on fourth-and-inches at the Texas 28-yard line with 2 minutes, 25 seconds left in the game.

Lewis made the catch and ran 61 yards down to the Nebraska 11 to set up the last of Priest Holmes’ three touchdowns. When Cedric Woodard recovered an NU fumble at the Horns 26 with 34 seconds left, the Horns were reveling in the unbelievable and the 40,000 Cornhusker fans on hand were distraught that this year’s crop had failed.

“I don’t know what’s going to happen,” Nebraska Coach Tom Osborne said. “We were hoping to go to the Sugar Bowl and play Florida State. We hadn’t thought about anything else.”

While Nebraska mulls not playing for a national title for the first time in four seasons, the Longhorns crash the alliance party, awaiting today’s 4:30 p.m. bowl selection show to find out if they’re headed to the Fiesta or Orange Bowl.

The Longhorns, a 19-point underdog, had been earmarked for the Alamo or Holiday bowls while the Huskers had been penciled in for a matchup with Florida or Florida State with the national title on the line.

“We intimidated them,” said Texas cornerback Bryant Westbrook, no shrinking violet himself. “We showed them what’s up.”

As well as the Longhorns had played in the 51-15 rout of Texas A&M last week to reach the Big 12 title game, they surpassed it. Overlook two Brown interceptions, one that erased a great scoring opportunity and another that led to an NU field goal and a 27-23 lead with 10:11 left in the game, and Texas did exactly what it needed to do to win.

It was important to stop the Nebraska rushing game, particularly the big plays, and although the Horns allowed 243 yards on the ground, they forced the Huskers to work at it. Twice the defense stiffened to force field goals, and Nebraska’s shortest scoring drive was 11 plays.

The Longhorns tried to put the ball in the hands of quarterback Scott Frost, who ran for 47 yards (minus sacks) and fumbled three times, losing two.

On offense, the Longhorns needed to mount a rushing game. Fullback Ricky Williams had his second-worst day as a Longhorn, rushing eight times for only 7 yards. Halfback Shon Mitchell was not much more effective, gaining only 16 yards on seven rushes.

A look at the odds suggested Texas call a priest, and that’s just what the Horns did. Little-used senior halfback Priest Holmes, who had gained only 64 yards total in the last six games and whose role was expected to be picking up the blitz, instead split the Nebraska defense on the quick trap play up the middle, running for 120 yards and three touchdowns on only nine carries.

Texas also had to hit the big play. The Horns scored on a 61-yard trap run by Holmes — the longest rush on the Huskers this year — and a 66-yard touchdown pass from Brown to Wane McGarity — the second-longest pass they’ve allowed.

To make the big play, the Longhorns had to protect Brown. Nebraska’s defense had 47 sacks in the first 11 games. The Blackshirts had none on Saturday. The Longhorns’ offensive line — tight end Pat Fitzgerald, tackles Jay Humphrey and Octavious Bishop, guards Dan Neil and Ben Adams and center Ryan Fiebiger — with help from the running backs and a variety of zone and man pass protections and rollouts by Brown, did the job.

“I thought our offensive line was superb,” Mackovic said. “We have three sophomores (Adams,  Bishop and Humphrey), and they were playing against a front that was arguably the best anybody’s seen in 30 to 40 years.”

“They did a lot of maximum protection,” said Nebraska end Grant Wistrom. “They kept the backs in, but mainly it was James Brown. I thought he played well today. A couple of times we thought we had him sacked for sure. But he got out of it.”

Brown made a day of it, and when it was over, so had the Longhorns. They did not send flowers. They sent a message. Westbrook, the Horns’ left cornerback, spent the day jawing with his old high school teammate and Huskers counterpart, Michael Booker, each talking to the other while one played and the other prowled the sideline.

“After Priest scored that last touchdown, I told him it was over,” Westbrook said. “I could see it in my boy’s eyes. He gave me that look and turned his head.”

And there was more. Booker’s younger brother, Deion, is a senior at El Camino High School in Oceanside, Calif., and a top recruiting prospect who’s apparently considering following his brother to Lincoln.

“I told him to tell his brother to come to Texas,” Westbrook said with a laugh. “A winning program.”

Breakfast with Bevo: Twenty years later, a look back at Texas’ decision to Roll Left