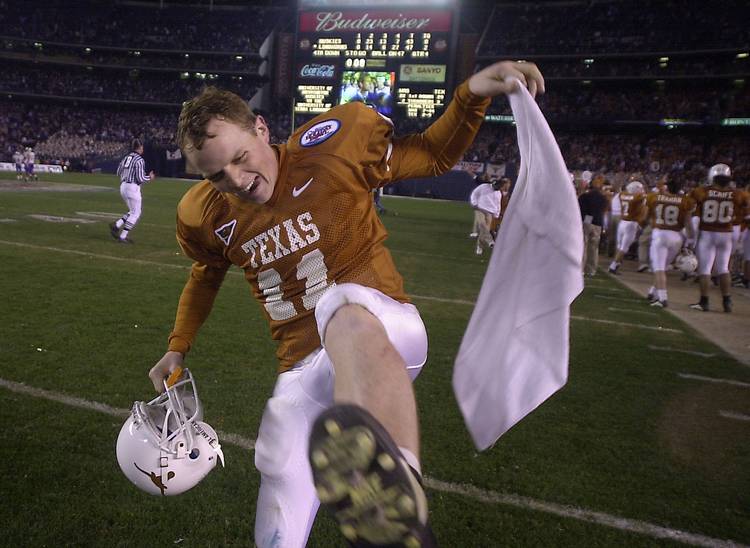 Univeristy of Texas' Major Applewhite celebratets at the end of the game after the Longhorns defeated the University of Washington Huskies 47-43 in the Culligan Holiday Bowl held in San Diego, California on Friday, December 28, 2001. (Rodolfo Gonzalez/American-Statesman)

Michael Huff is joining the Texas coaching staff, officially reuniting one of the best defensive backs in school history and the program. Huff says on Twitter he’ll be an assistant defensive back coach and officially he’ll be listed as a “quality control” coach on Tom Herman’s staff.

Herman was a graduate assistant here at Texas, but he didn’t play for the Longhorns like Huff and defensive line coach Oscar Giles.

That got us thinking: Who are some Texas players turned Texas coaches?

Here are five Texas football players who went on to coach at Texas and elsewhere:

Technically,  we didn’t specify it had to be for coaching football. Falk played football at Texas in 1918 and 1919. He also played baseball at Texas, obviously, and went to coach 27 years for Longhorns. The baseball stadium is partly named after him. and he’s a college baseball hall of famer.

Giles played at Texas and graduated in 1991. He returned to Texas as a defensive line coach in 2005, Texas won a national championship and Giles recruited a lot of great players. He left when Charlie Strong took over, hooked up with Tom Herman and became the assistant head coach at Houston and is now back at Texas. Life is funny.

He left when Charlie Strong took over, hooked up with Tom Herman and, who knows, he may return to Texas as a coach. We’ll keep you posted. Life is funny.

Texas is on head coach No. 30 now, but McWilliams is the first Texas player in the modern era to become head coach of the program and the only Texas player who played under Darrell Royal to be head coach. He took over for Fred Akers in the 1980s, led the Longhorns to the Southwest Conference title in 1990, which ended with a Cotton Bowl loss to Miami and finished his time at Texas with a 31-26 record. He coached at Texas for years before leaving to be the head coach at Texas Tech in 1986, but returned after a year to be head coach. He was a lineman at Texas, winning a national championship in 1963. McWilliams was also once one of the youngest coaches in Texas high school football. He coached Abilene High and went 21-17-2 in four seasons.

Landry is one of the greatest coaches in the history of the football. He coached the Dallas Cowboys to two Super Bowl wins, five NFC championships, is in the Dallas Cowboys Ring of Honor and the Pro Football Hall of Fame. Tom Landry won 250 games as an NFL coach. Landry played at Texas, was a captain of the team and went on to make the NFL Pro Bowl in 1954.

Urban Meyer: Tom Herman is ‘ready for the task’ at Texas