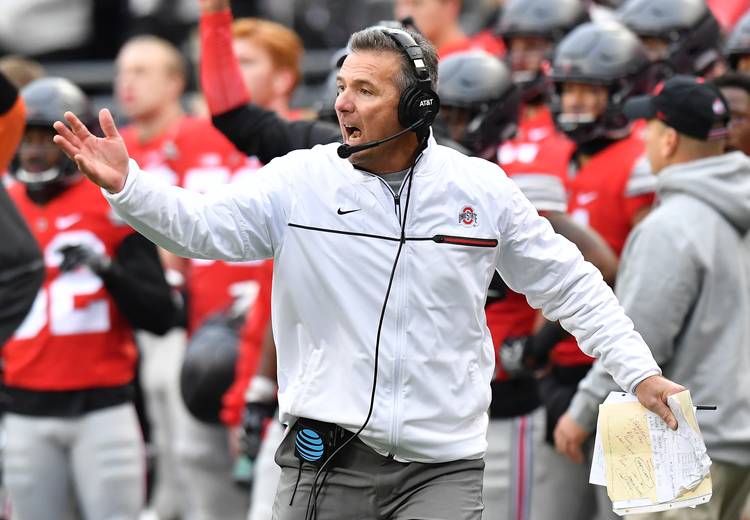 Ohio State coach Urban Meyer reacts on the sideline during overtime of the game against the Michigan Wolverines at Ohio Stadium on November 26, 2016 in Columbus, Ohio. (Photo by Jamie Sabau/Getty Images)

ATLANTA — Ohio State coach Urban Meyer once plucked a promising offensive coach from Iowa State and brought him to Columbus. Now, Tom Herman is “ready for the task” of leading Texas, Meyer said.

During a press conference for the College Football Playoff on Thursday, Meyer spoke highly of Herman, Ohio State’s offensive coordinator from 2012-14. Herman helped the Buckeyes win the 2014 national championship with third-string quarterback Cardale Jones before leaving to become the head coach at Houston.

“A great person, a great family man, a guy that understands football. Very smart,” Meyer said. “He came into us with a tough situation. We asked him to learn our offense and help coordinate it, and he did a wonderful job.

“I think he matured and was really ready to take on his own program,” Meyer added. “I’m glad he went to Houston because of all the great players. He was looking at some other jobs previous to that, and I kept discouraging him because it’s all about can you go get good players in your program.”

Herman was 22-4 in two seasons at Houston, his only two years as a head coach. During that time, the Cougars were 6-0 against ranked opponents. He became the hottest name on the coaching market, and Texas reached a deal in the early hours after a post-Thanksgiving loss to TCU.

Herman is inheriting a Texas program that has endured three consecutive losing seasons under former coach Charlie Strong, who is now reportedly close to taking over at South Florida.

It’s well known that Herman badly wanted the Texas job since he worked as a graduate assistant under then-coach Mack Brown in 1999 and 2000. Herman tweeted a photo of his UT business card then and what it says now — head football coach.

“I think he’s ready for the task, and he’s always felt very strongly about the University of Texas, having been there with Mack Brown years ago,” Meyer said. “And obviously, everybody has great respect for that school.”