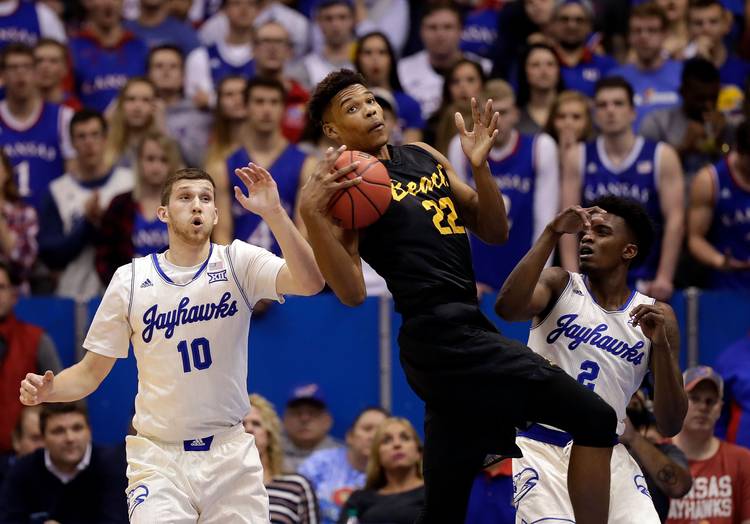 LaRond Williams (22) of the Long Beach State 49ers grabs a rebound over Sviatoslav Mykhailiuk and Lagerald Vick of the Kansas Jayhawks during the game at Allen Fieldhouse on November 29, 2016 in Lawrence, Kansas. (Photo by Jamie Squire/Getty Images)

About the Longhorns: Texas’ defense may be finding its groove. Alabama was just 9 for 22 shooting in the second half.  Then, Michigan made just 42 percent of its shots and scored only 53 points, about 16 below the Wolverines’ normal average. “I think the defense is really coming around,” G Tevin Mack said. “But we’ve got to continue to work on offense and put it all together in the game.” … It would help the offensive flow if G Jacob Young started coming on. He was 3 for 6 from 3-point range against the Crimson Tide. But in the last three games, he’s 5 for 16 from downtown. … Texas is 4-1 this season at home and 18-4 under Shaka Smart at home. … Did you see that UT-Arlington took down No. 12 Saint Mary’s for its first win over a ranked team in school history? Suddenly, that win over Texas on Nov. 29 doesn’t look so bad.

About the 49ers: On paper, this looks like a walk-over. The Longhorns are playing a team with a 2-9 record? Well, dig deeper into Long Beach State’s record and examine those losses. Coach Dan Monson’s club has played (and lost to) North Carolina, Louisville, UCLA, Washington and Kansas. … G Justin Bibbins is a solid floor general who wants to get the ball to his 6-foot-7 big men, Gabe Levin and Temidayo Yussuf. Levin leads the team in scoring at 12.5 points and has a team-high 6.5 rebounds per game. … Justin Bibbins is becoming quite the pickpocket. He’s got 16 steals this season. Compare that to Texas’ totals. Kendal Yancy is the team leader with eight steals. … Opponents are shooting 41 percent from 3-point range, an indicator of porous perimeter defense.