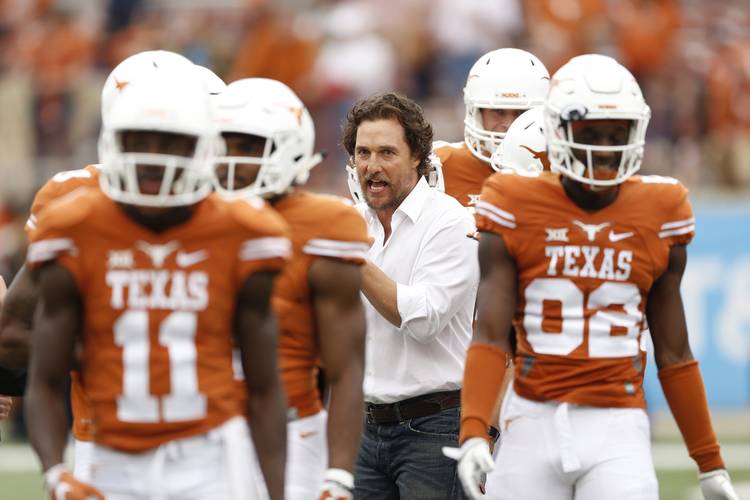 Matthew McConaughey mixes with the Longhorns before the last game of the season at Royal-Memorial Stadium on Friday November 25, 2016. JAY JANNER / AMERICAN-STATESMAN

The 2017 Texas football schedule is now complete with Tuesday’s unveiling of the Big 12 slate of games from the league office.

First-year coach Tom Herman will host Maryland (Sept. 2) and San Jose State (Sept. 9) before going on the road for a huge showdown at USC at the Coliseum on Sept. 16.

After a week off, the Longhorns will then start conference play on Sept. 30. First comes a road trip to Iowa State. The Longhorns’ last trip to Ames was miserable, a 24-0 shellacking on Halloween night in 2015. Texas then hosts Kansas State on Oct. 7.

The annual Texas-Oklahoma showdown comes on Oct. 14, the customary second weekend in October.

Texas then returns home to face Oklahoma State at Royal-Memorial Stadium on Oct. 21. That date coincides with the return of F1 racing to Circuit of the Americas. Hotel rooms are already at a premium that weekend and will be hard to get.

The closing stretch appears favorable. Texas will host Kansas on Nov. 11, play at West Virginia on Nov. 18 and then host Texas Tech on Nov. 25 — two days after Thanksgiving.

It’s possible the Tech game will get moved one day earlier to Friday, Nov. 24. If that game holds on Saturday, it would be the first time since 1990 the Longhorns have played two days after Thanksgiving.

All kickoff times and TV listings will be determined at a later date.

Here's a look at the 2017 Texas football schedule. All kickoff times and TV listings will be determined at a later date.