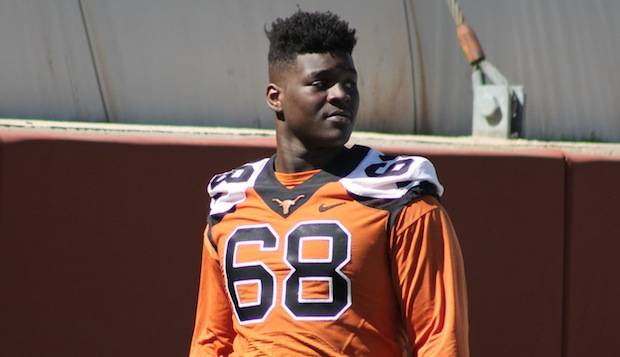 Have you ever wondered what happened to Desmond Harrison, the Texas offensive lineman suspended for the entire 2014 season?

Well, it appears he could finally see a football field after three seasons of inactivity. West Georgia — a Division II school in Carrollton, Georgia — announced Wednesday that it had signed Harrison.

Harrison never played a down during Charlie Strong’s first season in 2014. The year before that he appeared in seven games as a junior transfer from Contra Costa College (San Pablo, California). A 6-foot-7, 305-pound offensive tackle, Harrison was a highly sought after recruit who received offers from Oklahoma, USC and Arizona State among others.

He was one of 10 players not retained at the end of Strong’s first season.

Harrison joins a Wolves program that has been on the rise in recent years under coach Will Hall. West Georgia made it all the way to the Division II semifinals in 2015 before falling to eventual champion Northwest Missouri State. The Wolves were 7-4 in 2016.