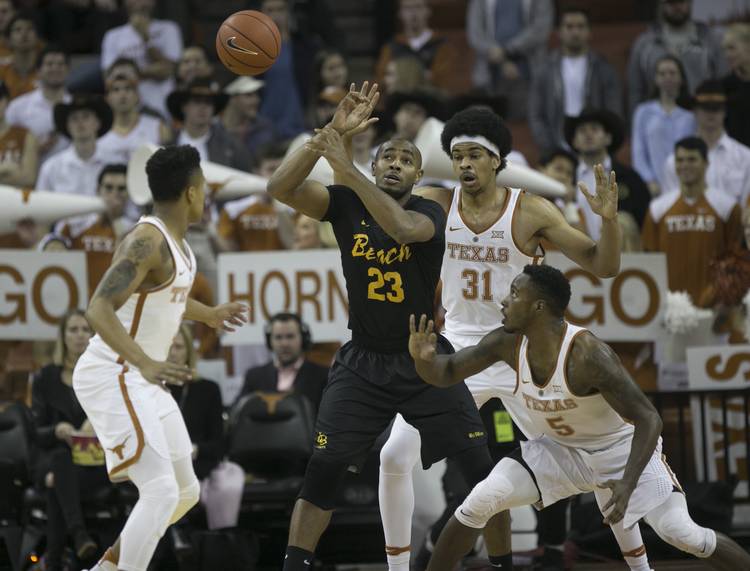 Series history: Arkansas leads the all-time series 86-67. The two teams met annually during the Southwest Conference era. However, they have not played each other since Texas won 79-46 on Jan. 4, 2011, in Austin.

About the Longhorns: From a historical perspective, neutral-site games weren’t always to Texas’ advantage in this series. The Razorbacks have a decided 16-3 edge in that department, the majority of which coming in the old Southwest Conference tournament. Arkansas also has a 5-1 all-time edge in games played in Houston. … Tevin Mack and Kerwin Roach Jr. are putting up solid numbers, but the Horns could use more production inside from F Jarrett Allen. Teams have clamped down with double teams when the ball goes inside, forcing UT’s big men to throw it back out. … This is Texas’ first trip to the Toyota Center since Dec. 20, 2008, a 67-63 loss to No. 19 Michigan State. The Horns are 3-1 at the home of the NBA’s Houston Rockets.

About the Razorbacks: This isn’t the Arkansas of old. The program hasn’t been in the Associated Press Top 15 rankings since 2000. In today’s social-media driven society, Arkansas doesn’t call its defense “40 minutes of hell” like the old days, either. Now, it’s dubbed the #Fastest40. Coach Mike Anderson’s club has scored more than 20 fast-break points in four of nine games this season. … F Moses Kingsley has 26 blocks and 64 deflections this season. Later this season, he should become the 40th player in school history with 1,000 career points. … The Hogs are 27-2 in the last five years under Anderson when the opponent turns the ball over 20 times. … G Dusty Hannah has made 25 consecutive free throws and hit 55 of 59 in his last 12 games.

Which Charlie Strong quote made ESPN’s ‘Quotes of the Year’ story?