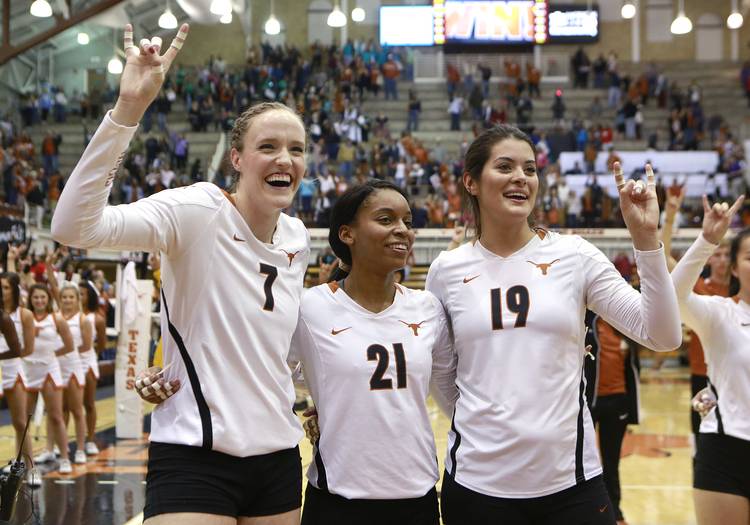 COLUMBUS, Ohio – The NCAA will conclude its Division I volleyball season on Saturday night as Texas and Stanford battle for a national championship at Nationwide Arena. Texas (27-4) is the NCAA tournament’s fourth overall seed, and the Longhorns are coming off a sweep of top-seeded Nebraska. No. 6 Stanford (26-7) has knocked off the tournament’s second and third seeds over its past two matches.

Each a second-place finisher in their conference, Texas and Stanford are chasing a bigger championship this evening. Both teams survived close calls in the NCAA Tournament. Texas overcame two match points in a third-round thriller against BYU, and Stanford rallied from a 2-0 hole in a five-set win over Wisconsin in the regional finals.

Here are more facts to learn before tonight’s match-up, which will be televised at 8 p.m. (CST) on ESPN2:

1. Texas and Stanford have combined for eight NCAA championships

Whoever wins tonight will have to clear out some room in their trophy case. Texas won NCAA championships in 2012 and 1988, and Stanford earned the most-recent of its six titles in 2004. The Longhorns were also the AIAW champions in 1981.

Texas and Stanford are both led by coaches who took over their programs in 2001. Texas won its 2012 championship under the guidance of Jerritt Elliott. John Dunning was coaching the Cardinal in 2001 and 2004 when they were the last team standing in the NCAA bracket. (Dunning also led Pacific to NCAA championships in 1985 and 1986).

Only two players on either team have experienced the claiming of a national title. Texas defensive specialist Nicole Dalton, who has been a team captain since 2014, appeared in that 2012 title match against Oregon. Longhorn outside hitter Paulina Prieto Cerame also won a championship with Penn State in 2013.

2. Stanford has a lead over Texas in the history books

Thanks to a 3-1 win in 2013, Texas has won the most-recent installment of this rivalry. Stanford, though, holds an 8-18 edge in the all-time series with five of those wins being recorded in the NCAA Tournament. (Texas has twice beaten Stanford during the December Madness).

Volleyball, though, isn’t the only sport that Stanford boasts a winning record against Texas in. In regards to team sports, Texas has found its most success against Stanford in softball.

Texas, though, did score a big head-to-head victory over Stanford in 2002. That year, Sports Illustrated respectively ranked Texas and Stanford as the best and second-best athletic departments in the country.

3. The Ducks and Badgers provided these teams with a measuring stick

Texas and Stanford have two common opponents on their 2016 schedule: Oregon and Wisconsin.

Texas opened this year with a 3-0 win over the Ducks, and Stanford swept Oregon in its second-to-last match in the regular season. Texas, though, was beaten in five sets by Wisconsin on Sept. 18, and the Cardinal rallied past that Wisconsin team in the postseason’s fourth round.

Texas is 1-0 against teams from Oregon’s Pac-12 conference this season. Stanford last played a team from the Big 12 in 2014.

4. Three All-Americans have bounced back from serious injuries

If you’re searching for comeback stories, you don’t need to look any further than Texas and Stanford’s rosters.

On Wednesday, Texas outside hitters Micaya White and Ebony Nwanebu were named to the first team of the AVCA All-America team. Joining them on the 14-player team was Stanford senior middle blocker Inky Ajanaku.

Those three players combined to play in one match during the 2015 season. White missed all of her freshman year due to a tibial stress fracture, while a back injury sidelined Nwanebu, who is currently a junior. Ajanaku suffered a knee injury during the summer of 2015, so she had to miss what was supposed to be her senior year.

White and Nwanebu are now leading Texas with their 4.02 and 3.73 kills per set, while Ajanaku is averaging 2.84 kills and a team-high 1.52 blocks per game. Wednesday marked the third time that Ajanaku earned AVCA first-team honors, and Nwanebu was also a first-team honoree during her freshman year at USC.

Speaking of Nwanebu’s time at USC, Nwanebu and Ajanaku played four times during the 2013 and 2014 seasons. Each player recorded double-digit kills in each of those meetings.

5. Texas and Stanford will look similar in 2017

In its sweep of Nebraska on Thursday, Texas started two seniors, two juniors, two sophomores and a freshman (and freshman Autumn Rounsaville was inserted into the match after the first play). Stanford started its two seniors alongside a sophomore and four freshmen against Minnesota.

Neither team will have many gaps on their rosters in 2017, although those holes won’t be easy to fill.  Setter Chloe Collins, who will end her collegiate career with the fourth-most assists in Texas’ history, joins Dalton and Prieto Cerame as the only seniors in the Longhorn locker room. Stanford will need to replace Ajanaku and setter Kelsey Humphreys.

Longhorns in the NBA: Through Dec. 15