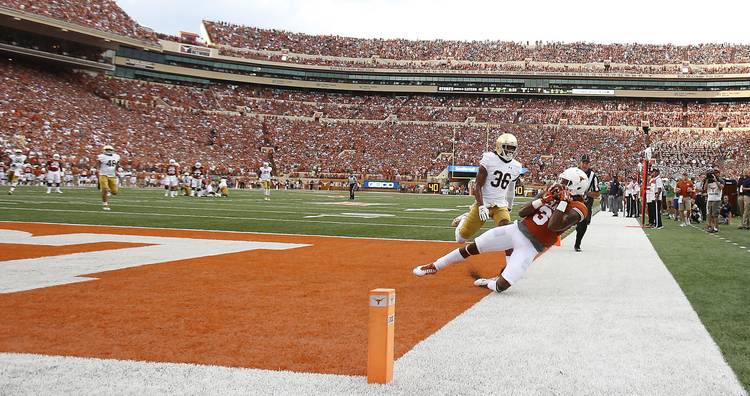 As 2016 comes to a close — finally — it’s time to look back on the year that was and peek forward to what might lie ahead as it relates to Texas athletics.

At least that’s what we’re doing for the next 13 days. Check back each day until the new year for a different post dedicated to the past and future of the Longhorns.

To start things off, here are our top 10 plays of the Texas football season.

10. D’Onta Foreman takes it to the house; house fights back

Get ready for a lot of D’Onta Foreman. I mean, the guy ran for 2,028 yards. I could probably do a top 10 list of just his runs, but I’m limiting it to three that were especially good. Let’s start with his 62-yard touchdown against Oklahoma State at Boone Pickens Stadium.

This was one of the first signs that this guy might be up to something special. It’s downgraded just a tad since he appeared to sustain an injury at the end of the run when he was thrown toward (into?) the stadium wall. That left a mark, and he was forced to the sideline after going down on his very next carry.

Touchdown Texas: Foreman takes it all the way. #Hookem pic.twitter.com/4RInuja2Sv

Early in the season opener against Notre Dame, Texas wide receiver John Burt dropped what would have been an 85-yard touchdown. He received a pep talk from true freshman quarterback Shane Buechele and an assurance that “there will be more chances.”

Burt got his chance early in the second half, and Royal-Memorial Stadium almost exploded as the sophomore speedster broke the plane for a 28-14 lead over the No. 10-ranked Fighting Irish.

This one could maybe be higher, but we’ll leave it here since it was against UTEP. (Then again, only one of these teams is still playing, and it’s not the Longhorns.)

Much was made of Heard’s switch from quarterback to wide receiver over the offseason, and he looked great the opening few weeks of the season. Especially on his 21st birthday, when he hauled in two touchdowns including this one in the first quarter.

Once he got his freshman feet wet, Longhorns freshman Devin Duvernay absolutely terrorized opposing defenses. Buechele was equally impressive on this 75-yard score against Iowa State, dropping the ball perfectly between the corner and safety. Then Duvernay’s speed took over.

If anyone was capable of stopping D’Onta Foreman this season, it sure as heck wasn’t Texas Tech. Up against the nation’s worst run defense at the time, Foreman went off for 341 yards — including 74 on this run early in the fourth quarter.

With one shoe, no less.

If Shane Buechele was the reliable starting pitcher, then Tyrone Swoopes was his closer. That looked like it was going to be an unstoppable tandem after Swoopes dove headfirst into what appeared to be the biggest Texas win in years.

What we know now alters that image a bit, but re-watching the highlight will still give you goosebumps.

My personal favorite of Foreman’s touchdown runs this season. Before he was a star, he showed all the makings when he scored from 47 yards against Cal. The footwork and the vision to skirt defenders in the backfield and shoot through an open hole will serve him extremely well at the next level.

I tried to come up with defensive highlights; I really did. And if I missed a worthy one, feel free to shoot me a nasty email. This just wasn’t a great year for the Texas defense, and big plays were especially sparse. However, P.J. Locke’s diving interception against Baylor certainly counts.

True freshman Collin Johnson kind of lurked in the background among a star-studded receiving corps until OH MY GOD HOW DID HE CATCH THAT!? Yeah, you want to watch this play again.

Speaking of incredible catches, remember Armanti Foreman’s against Notre Dame? It feels like so long ago, but there really weren’t any Texas touchdowns this season better than the first. It was also the first touchdown pass of Buechele’s career, and it was part of the most memorable win of the year.