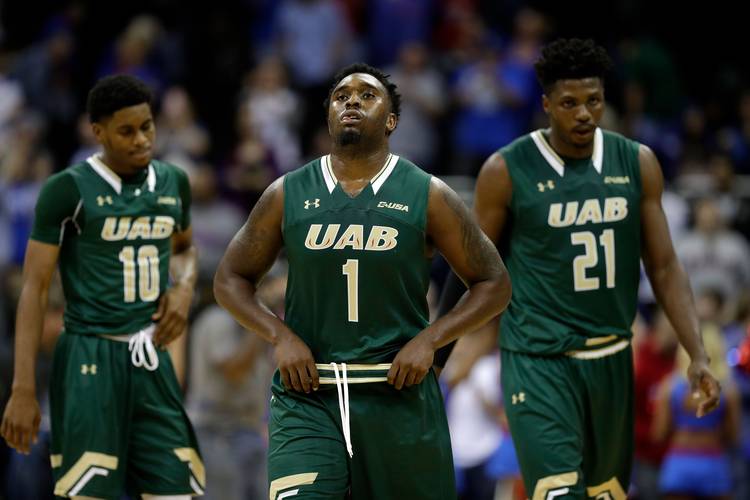 Javien Williams #10, Denzell Watts #1, and Tosin Mehinti #21 of the UAB Blazers walk off the court after the Kansas Jayhawks defeated the Blazers 83-63 to win the CBE Hall of Fame Classic game at the Sprint Center on November 21, 2016 in Kansas City, Missouri. (Photo by Jamie Squire/Getty Images)

Series history: This is the first meeting between the two schools.

About the Longhorns: As difficult have things have been on the road this season, Texas is 5-1 at home. The only setback was a 72-61 loss to UT-Arlington. … There’s no denying that sophomore G Tevin Mack is having a solid season. He’s posted double-figure scoring totals in all but one game this season. He tied his career high with 20 points against Arkansas after going 4 for 8 from 3-point range. He’s scored at least 18 points in four of the last five games. … G Andrew Jones also is coming off his best performance of the year. He had 17 points and seven assists against the Razorbacks with three steals and two turnovers in 32 minutes. … Texas’ last non-conference game of the month is next Tuesday at home against Kent State.

About the Blazers: Robert Ehsan may be a new name as a head coach, but he’s got an established career in college basketball. He spent six seasons with Maryland and another at Virginia Tech before moving to the UAB staff in 2012. He took over this season for Jerod Haase, who left to become Stanford’s head coach. … The Blazers are coming in with some momentum. Chris Coakley put in a 4-footer in the closing seconds of a 75-74 overtime win over Southern, an NCAA Tournament team last year. On the year, Coakley is shooting almost 61 percent. … UAB gets contributions from multiple bench players, something Texas didn’t get against Arkansas. … The Blazers aren’t afraid of nail-biters. They’re 12-3 in the last 15 games decided by five points or less.