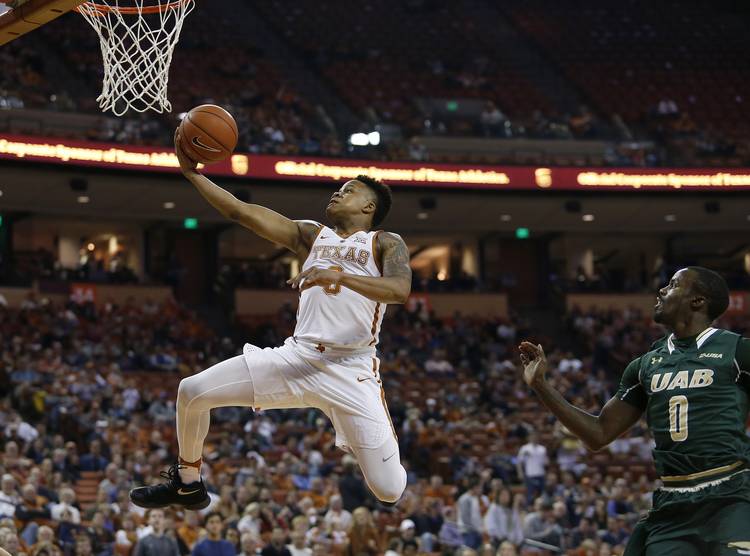 On Monday, Smart said the Longhorns were in the process of growing up. “It’s called being a man,” he told reporters. Two days later, Texas blasted Alabama-Birmingham 96-60 at the Erwin Center.

The Longhorns (6-5) used a 10-0 first-half run to give themselves some breathing room. Then, senior Kendal Yancy converted a traditional three-point play and hit a 3-pointer to spark a second-half spurt as Texas built a 25-point lead.

After some disappointing losses against UT-Arlington, Michigan and Arkansas, Texas needed a blowout. UT officials were locked in a war with the computers that counted all the statistics, so the final numbers weren’t immediately available.

That’s probably fine with Smart, who got solid contributions from all the regular players in his rotation and had walk-on Ryan McClurg in the game in the final three minutes.

Eric Davis Jr., publicly challenged by Smart, had a difficult start. He threw the ball away for a bad turnover and then fouled Hakeem Baker on a 3-point attempt. Instead of jerking Davis out immediately, Smart left his sophomore in to see what would happen. And there was Davis later in the first half hitting back-to-back 3-pointers that sparked a 10-0 run after the Horns had missed eight consecutive shots.

The point guard situation hasn’t been ideal. Andrew Jones got the lion’s share of the minutes early against the Blazers. He was called for traveling three times in the first four minutes, 11 seconds. Not ideal. But Jones threw a no-look pass to Allen to start the second half and hit a 3-pointer that gave UT a 48-27 lead and forced UAB to burn a timeout.

The Longhorns now go into their Christmas break, but there aren’t many days to spend with friends and family. Texas will play its last non-conference game against Kent State at 6 p.m. Tuesday at the Erwin Center. The Golden Flashes were 7-4 going into Wednesday’s late game at Oregon State. Then, Texas will open Big 12 play at Kansas State on Oct. 30.

The year in review: 10 best Texas football moments of 2016

The year in review: 10 worst moments of 2016 Longhorn football