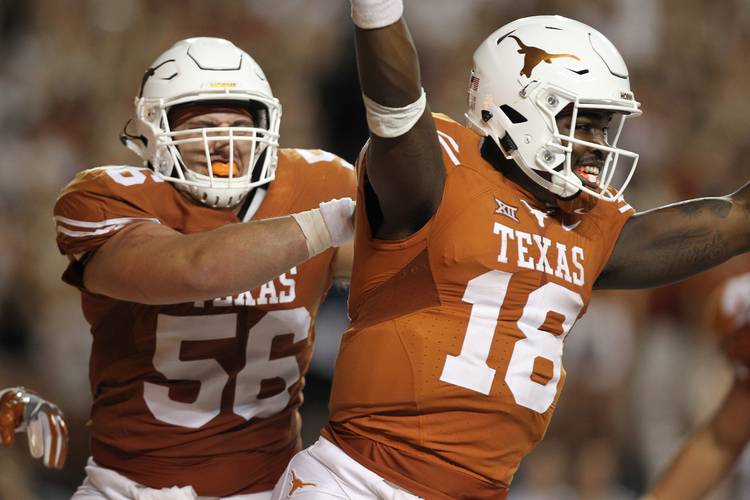 Texas quarterback Tyrone Swoopes dives into the endzone for a touchdown for an overtime Texas victory over Notre Dame, 50-47 at Royal-Memorial Stadium in Austin, TX. STEPHEN SPILLMAN FOR AMERICAN-STATESMAN

The Texas football season ended on such a sour note that it can be hard to remember the good times. Taking a step back, there were some truly glorious moments. Rather than wipe away everything with the exit of Charlie Strong, let’s take a few moments to appreciate the memories that Longhorns fans should hold dear from 2016.

After years of waiting for the next great Texas quarterback, fans were finally introduced to their true (freshman) savior, Shane Buechesus (H/T Solid Verbal) in the Longhorns’ season opener against Notre Dame. Equipped with a rocket arm and oozing with confidence, Shane Buechele started the season on fire.

He completed 16 of 26 passes for 280 yards, 2 touchdowns and an interception in his debut, then continued to impress throughout most of the season. Only Florida State’s Deondre Francois surpassed Buechele’s output of 2,958 passing yards among freshmen, but the Texas quarterback had more touchdown passes (21).

Foreman nearly broke a Texas record. Perhaps he should have. Tempered a bit by questionable play-calling near the end, Foreman’s historic day at Texas Tech should be remembered with awe. He carried the ball 33 times for 341 yards (10.3 yards per carry) and scored a 74-yard touchdown with one shoe.

One of the biggest criticisms of the past two seasons was an inability to play well on the road. The Longhorns nearly crumbled at the end of a mostly competent performance in Lubbock, but cornerback Kris Boyd finally shut the door on Texas Tech with his interception of Patrick Mahomes III.

To celebrate, the Longhorns snacked on some stale tortillas. Unfortunately, no more away victories followed.

On a pure coolness scale, this might have been No. 1. After D’Onta Foreman surpassed 100 yards during the first half against West Virginia — tying Earl Campbell’s record of 11-straight 100-yard games — the living legend greeted Foreman on the field.

One week later at Kansas, Foreman passed Campbell with his 12th-straight 100-yard game. Don’t worry, there’s still more Foreman on this list. He ended up with four spots, which seems about right considering he probably accounted for at least 40 percent of Texas fans’ happiness during the season.

5. Hours after firing Charlie Strong, Texas gets its man

Two hours, to be exact. After firing Strong at 9:30 a.m. the day after losing to TCU, all the pieces fell perfectly into place for Texas. At around 11:30 a.m., Tom Herman broke the news to Houston officials that he would be leaving, and by 4:15 p.m. he had been officially announced as Strong’s successor.

RELATED COVERAGE: Charlie Strong is out, Tom Herman is in: All in a Texas day

The relative ease and swiftness of hiring the hottest coaching prospect in college football showed how much pull Texas still has, despite recent on-field mediocrity.

Trent Domingue’s brief career on the 40 Acres had plenty of low points, but he gave Texas fans a reason to cheer with his game-winning field goal to beat No. 8-ranked Baylor on Oct. 29. At the time, a second-straight win left Longhorns fans feeling alright, alright, alright.

I said there would be more D’Onta Foreman. Texas fans badly needed a reason to celebrate after another 5-7 season, and Foreman gave it to them when he hoisted the Doak Walker Award at the College Football Awards in Atlanta. His 2,028 rushing yards were tops in college football during the regular season, and he left a definite mark on the Texas program before deciding to leave early for the NFL.

After he was fired, Charlie Strong talked about baking a cake. Many of the ingredients for that cake arrived to Texas on Feb. 3, 2016, when the Longhorns surged into the top 10 of the 2016 recruiting class rankings with a host of last-minute pledges. Predictions of an “explosive” National Signing Day came true, and Texas bolted to No. 7 in the 247Sports.com composite rankings.

The commitment of Manor’s Erick Fowler even got Strong to dab.

The 2016 football season started with a bang that couldn’t be matched. Yes, neither Texas nor Notre Dame made a bowl. Yes, both teams’ offensive explosiveness that night turned out to be a mirage. But the Longhorns and Fighting Irish still created one of the best college football games of the season — in front of a national audience on opening weekend, no less.

The game gave us 18-Wheeler hysteria, a next great Texas quarterback (see above) and created a genuine buzz around the Texas program that hadn’t existed in at least a half-decade.