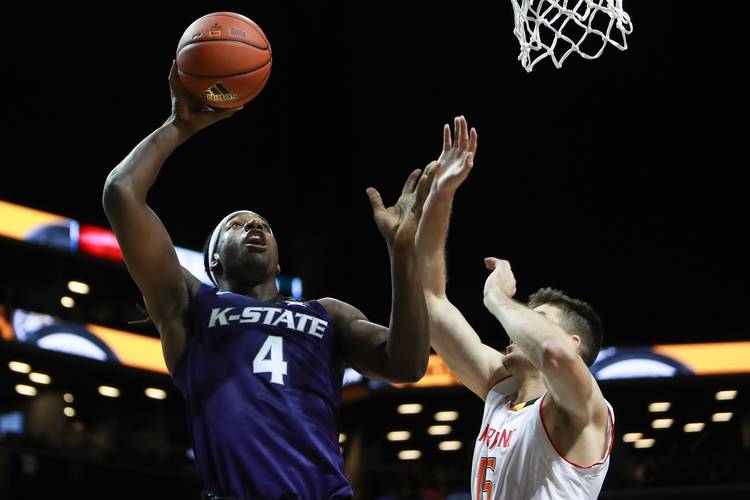 D.J. Johnson #4 of the Kansas State Wildcats puts up a shot over Michal Cekovsky #15 of the Maryland Terrapins in the second half during the championship game of the Barclays Center Classic at Barclays Center on November 26, 2016 in the Brooklyn borough of New York City. (Photo by Michael Reaves/Getty Images)

About the Longhorns: Unlike last season, Texas will head into Big 12 play with a full complement of big men. Prince Ibeh and Shaq Cleare had to go without the injured Cam Ridley during conference play last year. This time around, Cleare has two freshmen, Jarrett Allen and James Banks, at his side. Allen can score, but Banks’ job is provide defensive energy. He’s already made 22 blocks in the first 12 games. Not to be outdone, Allen has 16 blocks himself. … Now would be a terrific time for G Jacob Young to start hitting some 3-pointers. He’s made only 11 of 47 (.234) this season. … The Horns have an all-time record of 14-6 in Big 12 openers. This will also be the third straight season UT has opened Big 12 play on the road.

About the Wildcats: With an 11-1 record, Kansas State is off to its best start under coach Bruce Weber and is currently riding a six-game winning streak. But even K-State fans will admit those wins came against a weak schedule. The only loss was a 69-68 decision against Maryland. Last season, K-State started 10-2 and then went 5-13 in league play. “Everybody doubts you. I know the media doubts you. The fans, there are some fans that question you. You’ve got to go prove it,” Weber told the Kansas City Star. … F D.J. Johnson has steadily improved over the years and is enjoying a strong senior season. He’s averaging 12 points and shooting 66 percent. … The Wildcats have seven players with more than 10 steals each. The Longhorns have only two.