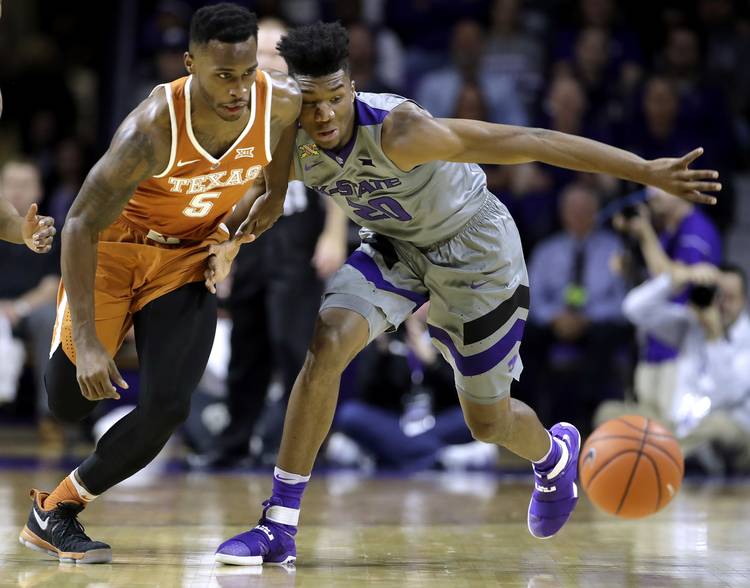 MANHATTAN, Kan. — Little mistakes always get you beat. Bad passes in traffic, shot clock violations, accidentally stepping on the baseline, losing track of the opposing team’s best shooters. All of it adds up.

Texas got a rude awakening to the rigors of Big 12 play in a 65-62 loss to Kansas State at Bramlage Coliseum.

The Longhorns (6-7, 0-1 Big 12) went more than eight minutes without a field goal in the first half, shot three air balls and had two shot clock violations before halftime. Still, they trailed by only three at the break. In summation, they shot 28 percent from 3-point range, fouled 26 times and turned it over 17 in what was most definitely a winnable game.

Instead, the veteran Wildcats (12-1, 1-0) found their shooting groove in the second half and slowly pulled away.

Dean Wade hit back-to-back 3-pointers, giving K-State a 38-33 lead. Then, Texas had two painful offensive possessions that resulted in turnovers. Jacob Young passed up an open corner 3-pointer and forced the ball to Eric Davis Jr., who turned it over. On the next trip down, Kerwin Roach Jr. stepped out of bounds for another turnover. K-State scored after both UT mistakes and led by 10 with 14:39 left.

The Horns closed the gap cosmetically in the final two minutes with Young and Jones’ 3-pointers. Davis’ bucket with 7 seconds left made it a three-point game. But Kamau Stokes hit two free throws to ice it.

Jarrett Allen may not yet be the Longhorns’ leading scorer, but he’s going to become the opposing team’s No. 1 line item on the scouting report. Allen had 14 points, some coming on twisting, awkward reverse layups, and pulled down 13 rebounds in yet another solid performance by the 6-foot-11 freshman. He’s now put up three double-doubles in the last four games.

The Horns fouled with impunity, and on some level, that’s a decent strategy against the Wildcats. Coach Bruce Weber’s team came in shooting a bland 66 percent from the stripe. But on this cool Friday night, K-State went 26 for 33 at the free throw line, giving the home team plenty of cushion.

Shaq Cleare sometimes can be too stubborn about using his lone post move. He’ll back down just about anyone on the block and try that baby hook. Against the Wildcats, Cleare showed terrific touch with head-on short jumpers and point-blank floaters that all fell true. He had 10 points in the first half on 4 of 6 shooting. It was the third time in the last four games Cleare finished in double figures.

The Longhorns went a painful 8 minutes, 20 seconds without getting a field goal in the first half. Allen’s dunk gave the Horns an 11-4 lead and things were looking pretty good. But Texas then missed 13 consecutive shots. K-State senior D.J. Johnson also blocked Allen on a dunk attempt in one of those plays that make the postseason highlight reel. When Allen got another dunk to go through the rim with 7:32 left in the first half, K-State had a 19-15 lead.

Oklahoma State comes to Austin on Wednesday after losing its Big 12 opener to West Virginia, 92-75. The Cowboys are now under the direction of Brad Underwood, who was 89-14 in three seasons at Stephen F. Austin. It’ll also mark the return of Texas killer Phil Forte III, who tormented former coach Rick Barnes for not recruiting him out of Flower Mound Marcus. Forte was injured last season and missed the games against the Longhorns.

Who would win the all-time matchup? Texas men versus Kansas State

Longhorns in the NBA: Through Dec. 29