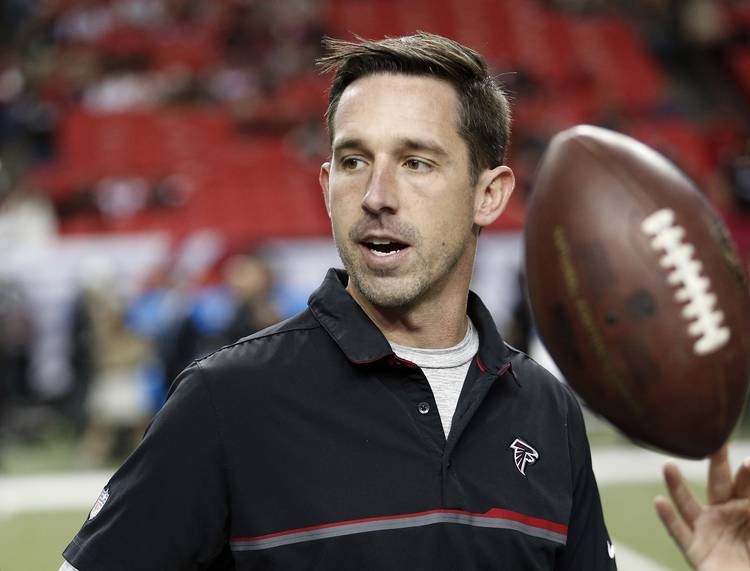 Atlanta Falcons offensive coordinator Kyle Shanahan walks on the turf before an NFL football game against the San Francisco 49ers in Atlanta. Shanahan, expected to be one of the top targets for teams looking to replace head coaches, could be available for interviews this week. Falcons coach Dan Quinn said Monday, Jan. 2, 2017, I'm sure he will be contacted by some teams. (AP Photo/John Bazemore, File)

Former Texas wide receiver Kyle Shanahan could soon follow in his father’s footsteps as a head coach in the NFL.

Shanahan has long been an offensive coordinator in the NFL, working for the Houston Texans, Washington Redskins, Cleveland Browns and now the Atlanta Falcons. As the Falcons’ offensive coordinator this season, quarterback Matt Ryan has thrown for 4,944 yards and 38 touchdowns. Ryan has emerged as an NFL MVP candidate in Shanahan’s second season with the franchise.

Just 37-years-old, the son of Super Bowl winning coach Mike Shanahan will interview for four jobs according to reports. One of those jobs is with the Denver Broncos, where Mike Shanahan won back-to-back Super Bowls in the late 1990s. The Los Angeles Rams, Jacksonville Jaguars and San Francisco 49ers are also interested.

After starting his college playing career at Duke, Kyle Shanahan transferred to Texas and played wide receiver. Shanahan was at Texas during the Chris Simms and Major Applewhite kerfuffle in the early 2000s, and while Applewhite may have been many fans’ preferred quarterback, clearly Shanahan was in Simms’ corner. The two are best friends, and yes, Simms has a tattoo of Kyle Shanahan’s initials on his leg.

Not making that up.

Shanahan was a graduate assistant coach at UCLA after his playing days and in 2004 moved to the NFL with the Tampa Bay Buccaneers. His breakthrough came when Gary Kubiak, his father’s offensive coordinator in Denver, hired him to he his receiver’s coach with the Houston Texans.