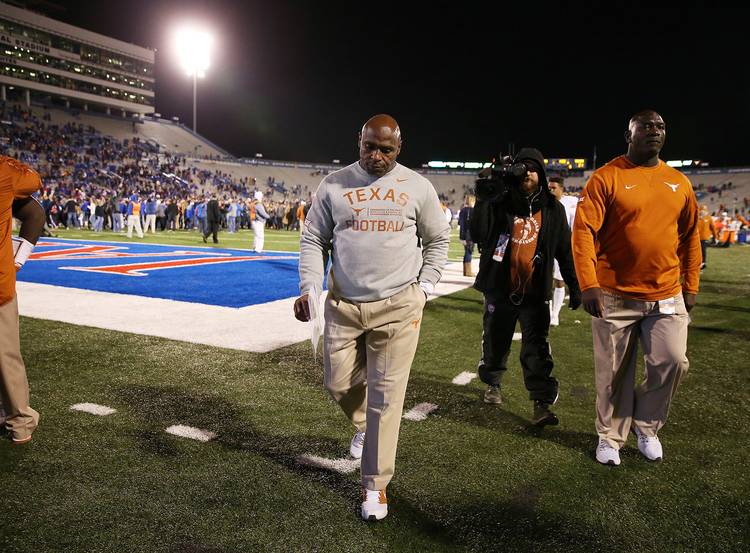 What a wild year it was for Texas athletics.

We already showed you what we thought were the biggest stories of 2016, but we thought it would be fun to look back and see which stories generated the most attention with our readers. Here are the stories that resonated with you, our readers, throughout a wacky year.

This feels like so long ago, doesn’t it? The Longhorns went into their first road game of the season ranked No. 11, but a wild second half went the wrong way and Cal running back Vic Enwere put on the finishing touches with a long touchdown run. Except… Enwere dropped the ball before he scored. Cameras caught the blunder and replay officials overturned the score, but they inexplicably gave the ball back to Cal despite Texas safety Dylan Haines picking up the ball.

How immediate does the recovery have to be. Ole boy snatches this up pretty quick pic.twitter.com/Jzq6TXFr6Q

8. Jordan Shipley finds his true passion (… or not)

7. Big 12 deal may be brewing between UT, Houston

The bizarre saga of Big 12 expansion just kept getting weirder all the way up until the conference decided not to expand in October. But the strangest chapter of them all might have been when politics and big-time college athletics butted heads back in July. After several Texas politicians — including Gov. Greg Abbott — tweeted support for the University of Houston joining the Big 12, some Houston supporters indicated they would “consider dropping their opposition to the University of Texas’ expansion in Houston in exchange for a deal that allows the Cougars to join the Big 12 Conference.”

Don’t worry, we’ll get to Charlie. But if McConaughey doesn’t win any awards for his acting performances this year, he deserves one for the impassioned, impromptu speech he delivered when stopped by a Fox7 Austin reporter in November. Somehow, he found the perfect way to capture the feelings of wounded Longhorns fans counting the days until Strong’s inevitable firing.

Dana blew his horn, all right. After nearly blowing a fuse several times during his team’s win over Texas, West Virginia coach Dana Holgorsen found himself next to a hot microphone at Royal-Memorial Stadium. He let it fly.

Referee leaves his mic on. Dana Hologrsen: "Our guys got bigger balls than their guys."

He wasn’t lying. Wilson, the top defensive tackle recruit in the Class of 2017, released his top five schools on Dec. 27. Texas, previously considered one of the favorites, was nowhere to be found. Strong’s new team, South Florida, previously not even in Wilson’s top 10, made the list.

I'll be announcing my commitment on National Signing Day pic.twitter.com/90DRiRtr35

3. Chris Simms: Major Applewhite ‘treated me like crap’ at Texas

“He tried to kind of make up at the end, but I couldn’t get (past) the first year and a half or two where he kind of treated me like crap,” Simms said during an interview with CBS Sports in December, after Applewhite got the head coaching job at Houston. “Of course, everybody on the team was telling me things he was saying behind my back.”

After the Longhorns lost at Kansas and reports came out that the decision had been made to fire Charlie Strong (we’ll get there), a source told Austin American-Statesman columnist Kirk Bohls that Texas players were threatening to boycott the season finale against TCU. Senior wide receiver Jacorey Warrick later confirmed that as true, but said, “coach Strong was not going to let us boycott that game.”

No surprise here. The story of the year, bar none.

However, there is one surprising thing about this list. No Bevo?!

Even after he made his debut, celebrated a win over Notre Dame, took in his first Red River Showdown, sent flowers to Mike the Tiger, played a role in the greatest Halloween costume ever and the greatest Christmas song ever, and celebrated 100 years, Bevo still couldn’t crack the top 10.