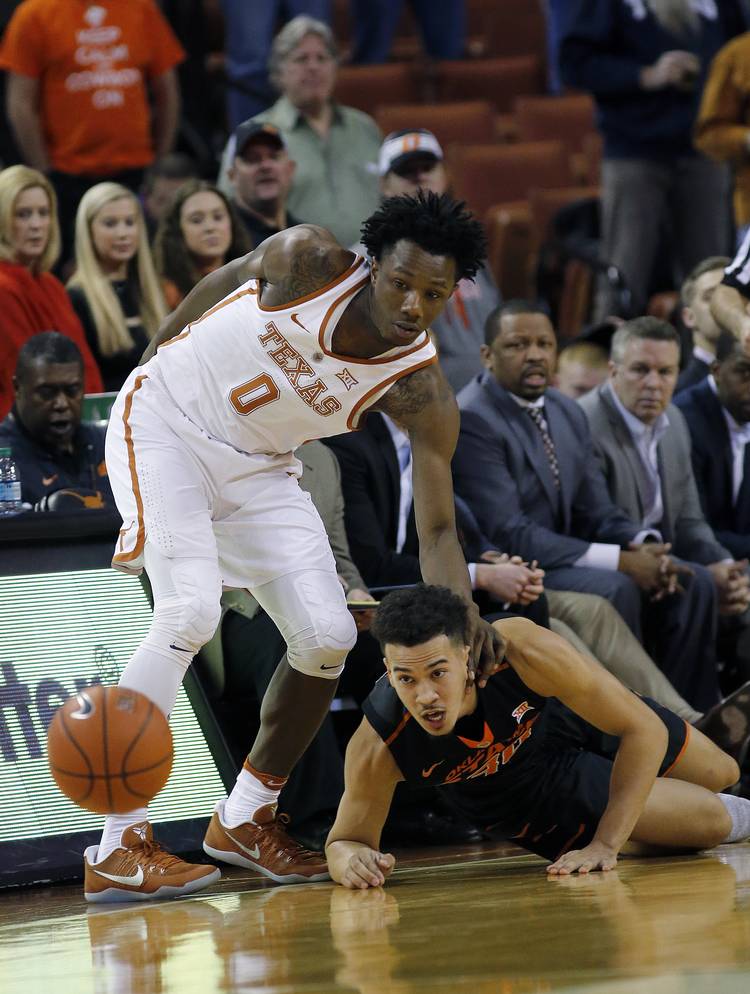 Tevin Mack #0 of the Texas Longhorns battles for a loose ball with Jeffrey Carroll #30 of the Oklahoma State Cowboys at the Frank Erwin Center on January 4, 2017 in Austin, Texas. (Photo by Chris Covatta/Getty Images)

The opening week of Big 12 play has been full of surprising moments, proving yet again this 18-game marathon is a two-month grind.

Texas finally joined the fight on Wednesday with a 82-79 win over Oklahoma State. A Longhorns team that some believe may actually be the worst in the Big 12 shot 44 percent and held it together for all 40 minutes at the Erwin Center.

Texas (7-7) is now 1-1 in Big 12 play, and despite this team’s real offensive struggles, it may be a mistake to count the Horns out here in early January.

Tevin Mack, playing his best game at Texas, poured in a career-high 27 points — the most any UT player has scored since Isaiah Taylor dumped in 28 against Iowa State on Jan. 12, 2016. That’s a span of 32 games, and Mack’s contributions came in critical must-win moment.

Kerwin Roach Jr. (11 points) and Andrew Jones (10 points) also finished in double figures as Texas withstood a 24-point outburst from OSU’s Jeffrey Carroll as the junior from Rowlett was 11 for 18 from the floor.

Welcome back, Eric Davis Jr. The sophomore has struggled all season long, for no apparent reason other than his shot wasn’t falling. At one point, even coach Shaka Smart appeared fed up with trying to reach the 6-foot-3 guard. But Davis finally got going against Oklahoma State. He hit a driving left-handed layup that gave Texas a 67-61 lead. He followed that with a two 3-pointers and finished the night with 16 points, tying his career high.

Coach Brad Underwood’s team did far better converting off Texas’ mistakes than Shaka Smart’s club did with Oklahoma State’s. In the first half, both teams had six turnovers each. But OSU had 15 points off those turnovers while Texas had only seven. By game’s end, the numbers had evened up. Both teams finished with 11 turnovers, and the Longhorns and Cowboys both had 19 points off the other’s mistakes.

Mack gave the Horns some offensive lift late in the first half when it appeared the Cowboys were finding their rhythm. He drilled a 3-point from the right corner, watched the next one rim in and out and then got a 3-pointer to swish from the top of the key. That tied the game 35-35 with 1:59 before the break. That was merely the warm-up act for Mack’s wild second-half outburst that helped clinch victory.

The injury bug has bitten current and former Longhorns alike. Senior Kendal Yancy missed the Oklahoma State game with a high ankle injury suffered last Friday at Kansas State. He isn’t sure whether he’ll be cleared for Saturday’s game against Iowa State. Sitting next to Yancy during pre-game was former Longhorn center Cam Ridley. He’s out with an Achilles injury. Ridley said his Japanese pro team wants him to return in three months, but their season ends in May.

Anybody up for a road trip to Ames, Iowa, where the high temperature on Saturday is projected to be 21 degrees? The Longhorns have endured some frustrating trips to Hilton Coliseum, which is usually full to the brim. Iowa State (9-3) had four players averaging in double figures going into Wednesday’s game against No. 2 Baylor. Guard Monte Morris is averaging 14.6 points and shooting 37 percent from 3-point range.