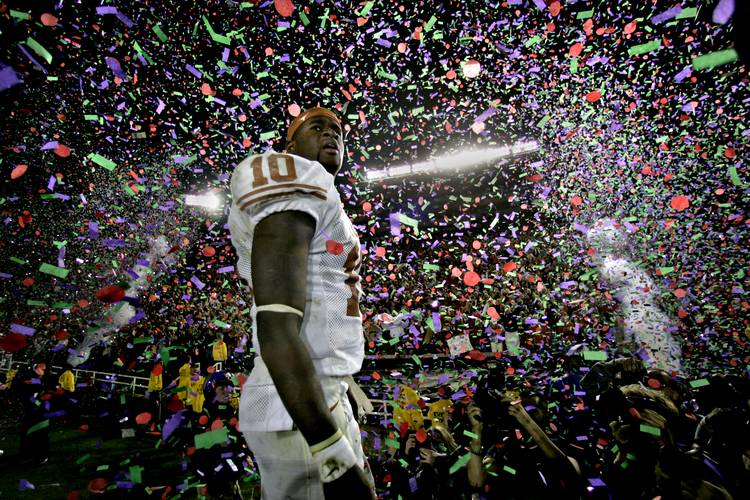 Wednesday marks the 11-year anniversary of Texas’ 41-38 win over USC in the Rose Bowl. The victory gave Texas its fourth national championship, the third of which was won in 1970. The Mack Brown-coached Longhorns closed out the 2005 football season with a 13-0 record.

USC held a 38-26 lead with 6:42 left in the fourth quarter, but Texas quickly pulled within five points on a 17-yard touchdown run by quarterback Vince Young. After Texas stopped USC on a 4th-and-2 at its 45, the Longhorns drove deep into USC territory in the game’s waning seconds. Facing a 4th-and-5 from the Trojan 8, Young then ran into the history books.

In what is considered by some to be the best college game of all-time, Young contributed 267 passing yards, 200 rushing yards and three touchdowns. A few months later, Young was selected by the Tennessee Titans with the third pick in the NFL Draft. Texas defensive back Michael Huff (7th overall) joined Young among the first 10 picks of that draft, as did USC’s Reggie Bush (second overall) and Matt Leinart (10th overall). Seventeen Longhorns and Trojans were selected in the 2006 NFL Draft.

Texas returned to the Rose Bowl in 2010 for the BCS championship game, but the Longhorns were beaten by Alabama. USC was a Rose Bowl entrant this season, and the Trojans were the victor in a thrilling comeback against Penn State.

If you’d like to spend your day on Memory Lane, please check out the American-Statesman’s coverage of the 2006 Rose Bowl’s 10-year anniversary.

What had Mack Brown so giddy at the Sugar Bowl? An early candidate for 2017 meme of the year