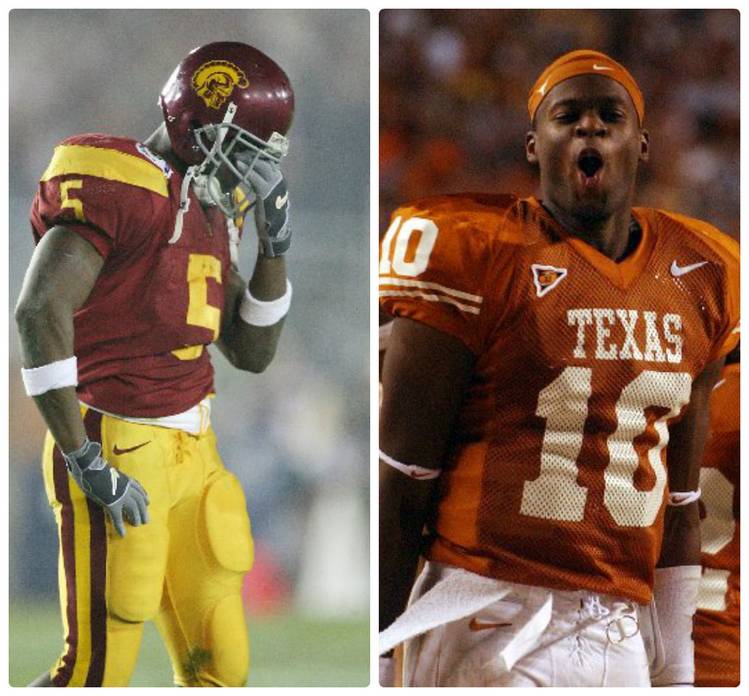 USC’s Reggie Bush (left) won the 2005 Heisman Trophy over Texas’ Vince Young (right), but it was Young who ended up besting Bush a month later to win the national championship.

Yes, it really has been 11 years since that magical night in Pasadena.

On Jan. 4, 2006, more than 35 million people watched Texas beat USC 41-38 in the Rose Bowl, securing a fourth national championship for the Longhorns. For many players and coaches, that night was the peak of their fame. For others, it was only the beginning.

RELATED COVERAGE: What a long, strange trip it’s been for Texas, USC

Have you ever wondered where some of the stars of the greatest BCS title game ever played ended up?

In a way it’s fitting that the greatest star of perhaps the greatest game in college football history never became a bigger star than he was on this date 11 years ago. Young was drafted third overall by the Tennessee Titans, was the NFL Offensive Rookie of the Year and made two Pro Bowls. He also threw for nearly 9,000 yards. However, his NFL career was brief and ended in turmoil after he was released by the Titans in 2011 and played in just six games for the Philadelphia Eagles before brief stints with several teams. Now, Young is right back where he belongs in Austin, and is a living legend providing analysis for Longhorn Network.

We’ll get to Reggie Bush and Matt Leinart, but the USC player most feared by Texas fans wasn’t a Heisman finalist. Pete Carroll was criticized for running White instead of Bush on that decisive fourth-and-2, but if you go back and look at the stats it was White’s day. Like Young, the Trojans star didn’t quite pan out in the NFL. He was also drafted by the Titans, and rushed for 2,349 yards over four seasons. His last NFL action came in 2009. White was ejected from a Trojans game in 2014, and this past fall, after he criticized USC offensive tackle Zach Banner on Twitter, Banner responded by telling White to “Stay away and stay irrelevant.”

Hey, look. It’s one of the newest members of new Texas coach Tom Herman’s staff. Michael Huff went on to a successful NFL career that included 118 appearances and 11 interceptions, most of them for the Oakland Raiders. Afterward he came back to Austin and did some TV work for the Longhorn Network. Texas fans will always remember how the former All-American safety scrambled to get to the ball after Reggie Bush went for an inexplicable lateral during the first half.

Another play that sometimes gets lost is Griffin’s interception on the goal line in the second quarter. Leinart thought he had a sure thing with a wide open Steve Smith streaking toward the end zone, but Griffin showed incredible range to make the pick. A product of Bowie High School in Austin, Griffin was drafted 19th overall by the Titans. They released him last February, but he caught on with the Carolina Panthers and made 40 tackles in 13 games during his 10th NFL season.

Here’s a trivia question for the next time you want to impress your friends: Which running back, along with Young, led Texas in rushing touchdowns during the 2005 season? Jamaal Charles had 11. Ramonce Taylor had 12, including a memorable 30-yard score in the Rose Bowl. It was the last game he ever played at Texas, as a drug arrest during offseason derailed his football career. After stints in Canada and with several arena teams, the Temple native who starred at Belton High School is now back in the Austin area coaching at St. Andrew’s.

In a game featuring future NFL wide receivers Limas Sweed, Quan Cosby, Dwayne Jarrett and Steve Smith, the Longhorns tight end tied Jarrett for the most catches with 10. They went for 88 yards. Thomas went on to a successful NFL career that included a Super Bowl championship with the New Orleans Saints in 2010. Since then he too has returned to Austin, where he works as an analyst for Longhorn Network.

Did you miss him? Hopefully, because you’re only going to be seeing more of Matt Leinart. The former USC superstar whose NFL career started out great and then got steadily worse has caught on as a lead analyst for Fox Sports’ college football coverage. Turns out he’s pretty good at it.

Maybe the Rose Bowl was a sign of things to come for Bush. He ran 13 times for 82 yards and a touchdown, and caught six passes for 95 yards. A really good day, right? Enough to draft him to your fantasy roster, right? But not the best player on the field. In 11 NFL seasons, Bush has 5,490 rushing yards, 3,598 receiving yards and 54 touchdowns. He’s been a productive player, but never lived up to the hype of being a No. 2 overall draft pick and one of the best college players ever. And, oh yeah, he forfeited his Heisman Trophy after the USC program underwent sanctions because of impermissible benefits he received.

Yet another player on this list whose stardom peaked in college. At 6-foot-4, 219 pounds, Jarrett was a dominant piece of the devastating USC offense. He had 10 catches for 121 yards and a touchdown in the Rose Bowl. Still the Pac 12’s all-time leader in touchdown catches (41), he was drafted by the Panthers in the second round and lasted just three full seasons before he was cut. He announced his retirement from the CFL’s Saskatchewan Roughriders in 2012.

There were a lot of Texas bodies helping him, but Ross was credited with the tackle on fourth-and-2 that left time for Young’s heroics. He went on to a seven-year NFL career, but is only the second-most famous athlete between he and his wife, track and field legend Sonya Richards-Ross. Ross joined the “On Second Thought” podcast back in October to discuss life after football.