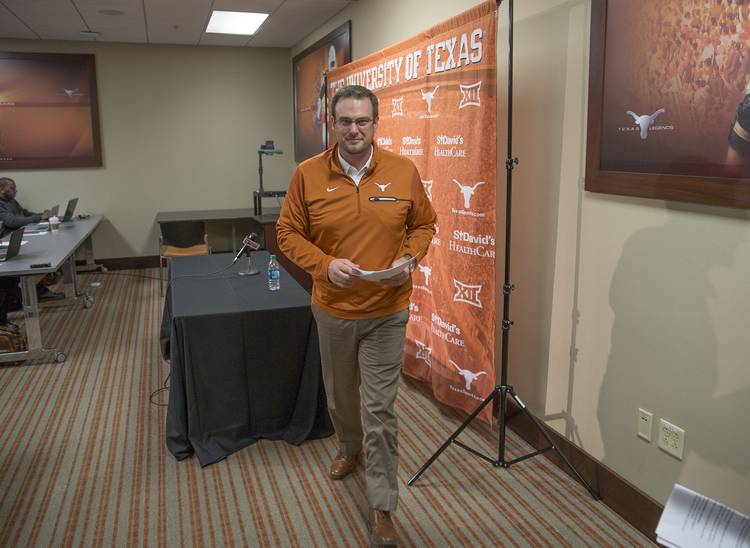 Texas coach Tom Herman from a press conference when he updated the local media about his coaching staff on Thursday, Jan 5, 2017. RICARDO B. BRAZZIELL/AMERICAN-STATESMAN

The Texas football coach joined hosts Chip Brown and Sean Adams on AM 1330 The Zone on Friday morning, where he shared a story about his love for skateboarding.

When he was the offensive coordinator at Rice (2007-2008), Herman said he decided to borrow a skateboard from one of Owls coach David Bailiff’s twin boys and ride it down the ramp inside Rice Stadium.

“It might have been a camp we were having or a spring practice, I can’t remember the exact details. One of (David Bailiff’s) young kids at the time … they had their skateboard. I said, ‘You know what, I haven’t been on a skateboard in awhile. I’m gonna see if I can put it on the top of this ramp and ride it all the way down.’

I accomplished the feat, but I think coach Bailiff was a little worried I might slip and fall and crack my head open and he’d be out an offensive coordinator.”

Herman grew up in Southern California, and said he used to skateboard and BMX growing up. Don’t expect him to pull out any Tony Hawk tricks around Austin, though. The coach said he has undergone 14 knee surgeries — four on his left and 10 on his right. Ouch.

The hosts also asked a couple of questions submitted by Longhorns fans, one of which had to do with alternate uniforms. While other schools have spurned tradition for flashy and/or throwback drags, Texas has resisted the craze thus far. Herman was asked whether or not he plans to bring alternate uniforms to the 40 Acres.

You can listen to the full interview below:

It’s not too early to recruit for 2018: Texas hands out five offers