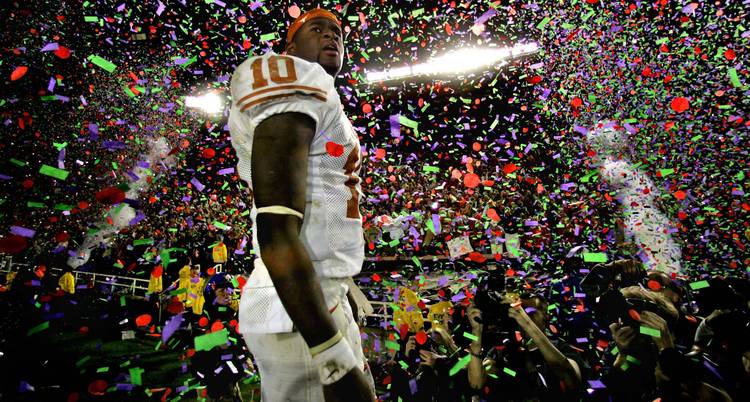 The news surely stirred up memories for Longhorns fans. From 1998-2010, Davis called the plays for some of the most successful offenses in program history. Take a walk down memory lane as we revisit some of the greatest moments that originated from Davis’ play sheet.

One year before Young sprinted right for a national championship, he bolted left for a fourth-quarter touchdown against Michigan in the 2005 Rose Bowl. Facing first-and-10 from the Wolverines’ 23-yard line, and trailing 34-28 with 5 minutes, 14 seconds left, Davis called for a naked bootleg to put his electric quarterback in space. Analyst Dan Fouts set the play up perfectly on the ABC broadcast, saying Texas should “go after them with (wide receiver) Limas Sweed,” who was lined up on the right side. The Longhorns did the opposite, and tight end David Thomas laid a brutal block to spring Young.

4. Hand the ball to Ricky; repeat

When Davis arrived with Mack Brown in 1998, he inherited the best weapon in college football. Ricky Williams made life easy for the play-caller that first season, and everyone ended up happy. Williams carried the ball 361 times for 2,129 yards and 28 touchdowns on the way to breaking Tony Dorsett’s career rushing record. The Longhorns won nine games including the Cotton Bowl, and the Brown-Davis era had officially begun.

Believe it or not, not all of Texas’ plays were runs in 1998. Davis had to get a bit more creative when No. 7-ranked Nebraska put up a wall at the goal line trying to protect a three-point lead at Memorial Stadium in Lincoln. Davis put faith in the arm of his redshirt freshman quarterback on third-and-goal. It wasn’t the prettiest throw of Major Applewhite’s career, but Wane McGarity hauled in the short pass for the upset win. Davis dialed up another classic play against the Huskers in 1999 with a screen pass from Applewhite to Mike Jones.

Ohio State came storming back to take the lead in the fourth quarter of the 2009 Fiesta Bowl, but Colt McCoy drove the Longhorns deep into Buckeyes territory in the final minute. With the clock winding under 30 seconds, Ohio State left the middle wide open and McCoy hit Quan Cosby on a slant for the win. Davis also broke Buckeye hearts in 2005, when he sent Limas Sweed to the corner of the Horseshoe.

There could be no other. The play that will live forever in the heart of every Longhorn sprouted from a conversation between Young and Davis in a meeting room. You can listen to Young’s recounting of that conversation in the above video. “It played out just like (Davis) said.”