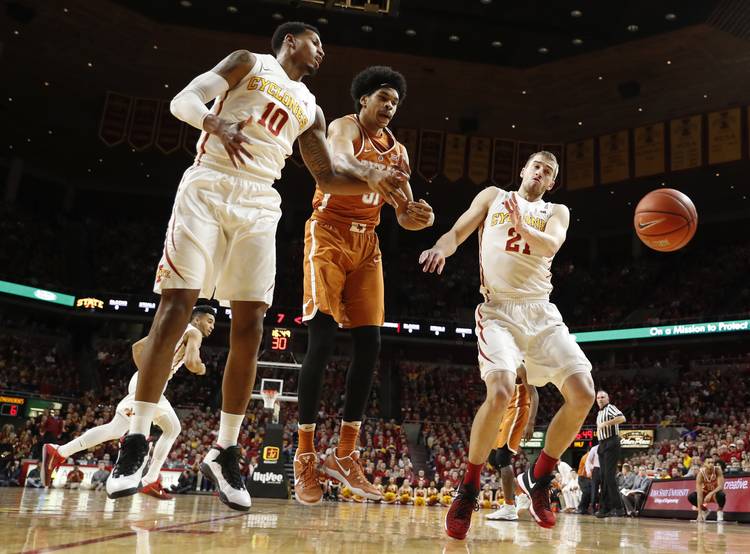 AMES, Iowa — Iowa State, considered the fourth-most experienced team in college basketball, got a considerable workout from Texas’ young pups but ultimately hung on for a 79-70 victory Saturday night.

The Longhorns sliced a 14-point deficit down to three with less than four minutes remaining. And when Kerwin Roach Jr. drew a charge on Deonte Burton, Texas was ready to get things tied up.

But Roach then threw the ball away after dribbling for far too long within the ensuing possession, and Burton answered with a layup. Then, Tevin Mack missed a 3-pointer, and the Cyclones had another one of their own — a long 3-pointer from Matt Thomas in the right corner.

Burton started wearing pink shoes years ago to honor his mother, who lost her battle with breast cancer. He wore flaming pink shoes against the Longhorns, and they helped tremendously. He took over the game in the second half with a driving layup, a 3-pointer over Shaq Cleare and a thunderous dunk to give Iowa State a 58-45 lead with 9:46 remaining. Burton finished with 27 points on 12 of 17 shooting.

Iowa State came into the game averaging 11 made 3-pointers in the last six games. The Cyclones were hot. But it’s hard for anyone to stay hot when temperatures are in the teens outside. Coach Steve Prohm’s club wanted to shoot Texas out of the game early but went 4 for 13 from 3-point range in the first half. Enough long-range shots fell in the second half to put the game away, though. Iowa State went 6 for 11 from downtown after the break.

Kerwin Roach Jr. played extensively at the point for the second consecutive game and continues to get more confident. He drilled two 3-pointers with an Iowa State defender in his face, the second of which made it a four-point game with six minutes left. Roach finished with 21 points on 7 of 9 shooting and dished out five assists in 37 minutes.

Nights like this make you wonder if Jarrett Allen truly is a one-and-done player. He had six turnovers in the first half, several coming on his inability to handle double teams. He missed a reverse dunk early but came right back and flushed another one. His mid-range jumper was off, and Allen got lured too far from the basket a few times defensively. Allen had a better second half but finished with 11 points and seven rebounds in 35 minutes.

Texas signee Jericho Sims, a 6-foot-9 forward, made the 3 1/2-hour drive from Minneapolis to see the Longhorns in person. He sat right behind the UT bench with his mother and father. The soft-spoken big man was ready to suit up and go.

“I definitely picture myself out there right now,” Sims said. “It’s exciting every time I see them play.”

Sims said he chose Texas over Florida, Kansas State, Nebraska, Oregon and Iowa State. He was rated the No. 1 player in Minnesota and 54th-best player in the nation by 247Sports.

“Coach Smart made me feel at home,” Sims said. “I was real excited the first time I saw him, because I used to watch him on TV. Texas is just a perfect position for me.”

TCU kept pushing No. 7 West Virginia all game long Saturday before losing 82-70 in Morgantown. The Horned Frogs will be in Austin on Wednesday. Then comes a brutal three game stretch for Texas includes a home date against West Virginia (Jan. 14) and then back-to-back road games against No. 2 Baylor (Jan. 17) and No. 3 Kansas (Jan. 21).