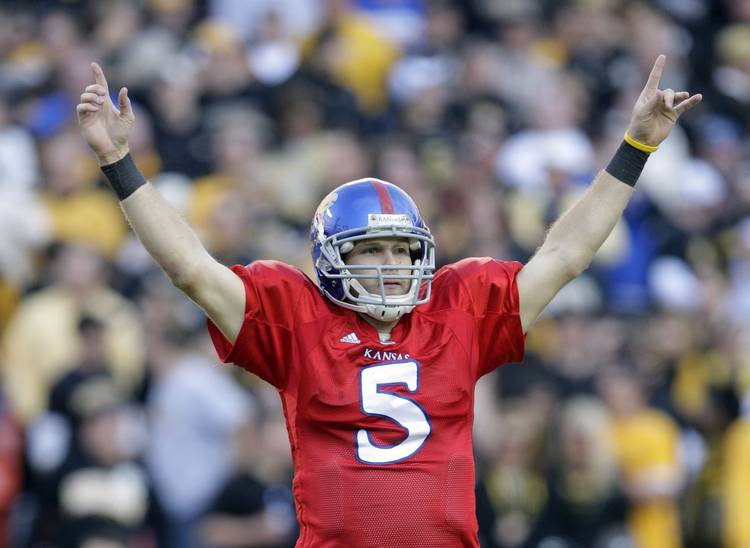 KANSAS CITY, MO - NOVEMBER 28: Quarterback Todd Reesing #5 of the Kansas Jayhawks celebrates after a play during the game against the Missouri Tigers at Arrowhead Stadium on November 28, 2009 in Kansas City, Missouri. (Photo by Jamie Squire/Getty Images)

New Texas offensive coordinator Tim Beck may never be the most popular person in Columbus or Lincoln, but be brought more to both Ohio State and Nebraska than fans of those schools care to acknowledge.

Even at Kansas — where Beck served under Mark Mangino from 2005-2007 — he had an eye for spotting talent, especially in Texas. Tom Herman hopes the former high school coach in Carrollton and Mansfield can help keep some of the state’s best players home.

Here are some of the best recruits Beck has landed at his past three stops.

Football fans in Central Texas remember this name. The first of six-straight Lake Travis quarterbacks to land in the Big 12, Reesing obliterated Kansas passing records during his four years in Lawrence and helped make the Jayhawks relevant. He’s most famous for leading KU to a 12-1 record in 2007, including an Orange Bowl win over Virginia Tech.

If you haven’t heard of these guys yet, you will. Outside of perhaps Urban Meyer, no two men are more responsible for Ohio State’s stockpile of quarterbacks than Beck and Herman. Buckeyes players and coaches have raved about Haskins, who redshirted this season behind J.T. Barrett. Martell, the No. 2-ranked dual-threat quarterback in the 2017 class, is also headed to Columbus at Beck’s urging. He talked about Beck’s move to Texas in the video below.

Oh, and another 5-star quarterback recruited by Beck, Emory Jones from Georgia, is also committed to Ohio State.

Do you see a theme developing here? On the next episode of “Hoarders,” we speak to Tim Beck about his obsession with quarterbacks. Beck dipped deep into Texas for Armstrong, who played high school football with former Longhorns running back Malcolm Brown at Cibolo Steele. Armstrong went on to be a four-year starter at Nebraska, compiling more than 10,000 all-purpose yards.

Not a quarterback this time, but another gem that Beck plucked from Texas. After rushing for nearly 3,000 yards his final two seasons at Plano, Burkhead chose the Huskers over LSU, Michigan and Texas A&M. He became a star his junior season, finishing third in the Big Ten with 1,357 rushing yards. He’s still cashing paychecks in the NFL as a reliable rotation player for the Cincinnati Bengals.

It is difficult to project exactly what 5-star recruits will become once they get to school, but potential is only part of why Browning is No. 1 on this list. The 6-foot-2, 229-pound linebacker, ranked No. 1 on the Austin American-Statesman’s updated Fab 55, represents the challenge facing Texas.

Herman is credited with opening the pipeline from Texas to Ohio State, and Beck kept it flowing the past two years. Now they’ll be tasked with shutting it off, not to mention warding off the countless other programs fighting for Texas’ elite prospects.