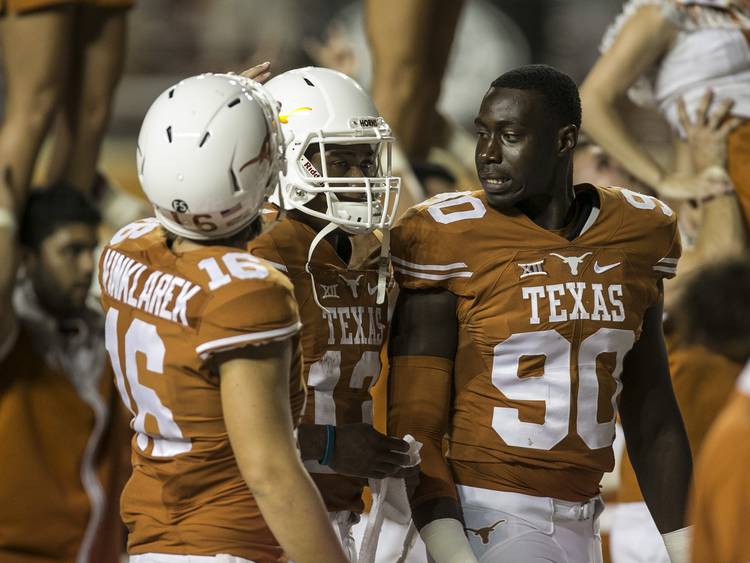 Clemson won a national championship last night beating Alabama 35-31 and scoring two touchdowns, including the game-winner, was a former walk-on Hunter Renfrow. Here is the moment when Clemson made him a scholarship player:

So here is the question: Is there a Hunter Renfrow on Texas’ roster?

Here are four walk-on players that pique our interest.

He joined the Longhorns in 2016 and has beefed up their Big 12 Commissioner’s Honor Roll numbers. He also played quarterback at Georgetown East View High School. He thew 24 touchdowns and 1,740 yards as he helped the Patriots go 9-3 in his senior year. He’s a wide receiver according to the current roster, but hey, maybe disaster strikes?

Hey, and  a pre-Longhorn beat writing Danny Davis interviewed him once!

A preferred walk-on from Blinn College who before then threw for 5,400 yards and 56 touchdowns for La Grange High School and was a his district’s MVP as a senior. He also was the 2013 Texas High School Baseball Coaches Association 3A Player of the Year. When he was at Blinn he played in nine games and completed 35 of 65 passes.

What? You think a long snapper can’t be a star? Well Holbrook was the deep snapper in all 12 games for the Longhorns last season. Despite being 5-foot-11-inches tall and 204 pounds, Holbrook was an all-district offensive lineman at Austin McCallum High School.

Because it allows us to put this here:

That one team mate who stay with that smell that kills the whole locker room!😰😲😷 pic.twitter.com/Nb8tp9h8KF

Apparently Strickland is that one guy every locker room has that doesn’t wash his stuff. Also, we found this interview from last spring.