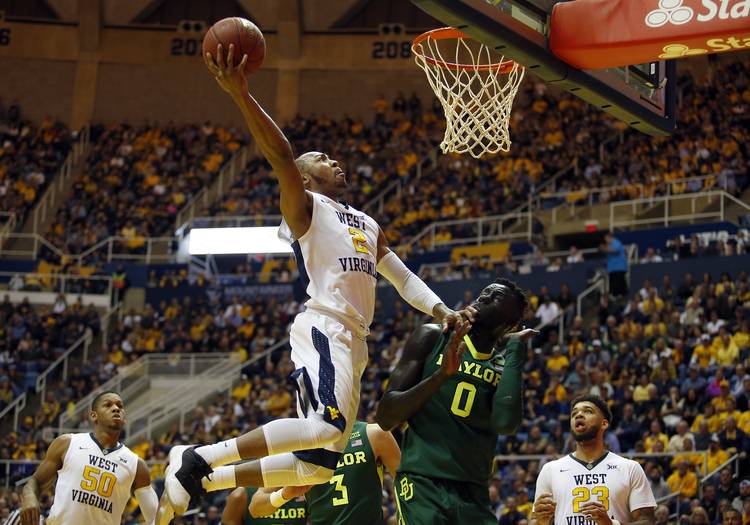 Jevon Carter (2) of the West Virginia Mountaineers drives to the hoop against Jo Lual-Acuil Jr. (0) of the Baylor Bears at the WVU Coliseum on January 10, 2017 in Morgantown, West Virginia. (Photo by Justin K. Aller/Getty Images)

Series history: Texas leads the all-time series 8-4. The Longhorns have won six of the last seven games, including a two-game sweep last season. The Mountaineers’ only win in Austin came on Jan. 9, 2013 — a 57-53 victory in overtime.

About the Longhorns: By all indications, Oak Hill Academy point guard Matt Coleman, the sole focus of UT coach Shaka Smart’s backcourt recruiting efforts, is ready to make a final decision. The Virginia native is expected to announce whether he will attend Texas or Duke on Monday. … With Tevin Mack suspended indefinitely, the Longhorns are suddenly without their leading scorer (14.8). That puts extra emphasis on big men Jarrett Allen, Shaq Cleare and James Banks, especially against a team that wants to turn the game into a track meet. Together, the trio is averaging 19.7 points. … Mack’s absence could force graduate transfer Mareik Isom into the lineup whether he’s fully healthy or not. The 6-foot-9 forward has not played this season due to an ankle injury.

About the Mountaineers: There was a lot of hype earlier this week when Baylor was named the nation’s No. 1 team in the weekly Associated Press Top 25 poll. West Virginia promptly cut Baylor down to size with an 89-68 win just one day later. The Bears had a season-high 29 turnovers and never led once. “They just kicked our butt,” Baylor coach Scott Drew said. … West Virginia’s ability to force turnovers is what fuels its sky-high scoring totals. Coach Bob Huggins’ crew ranks fifth nationally in scoring (90.1) and 27th in shooting (.486). … In a perfect situation, Huggins would prefer his team get more shots than the opponent. That’s what happened against Baylor. It’s a solid offensive rebounding team (15.9) that racks up plenty of multiple chances.

Wait, does #SaltBae have his own infatuation… with the Longhorns?