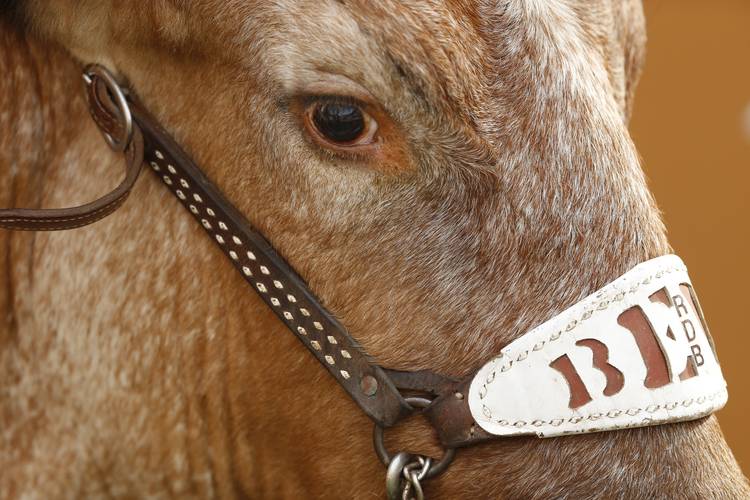 Bevo XIV before the game against California at Royal-Memorial Stadium on Saturday September 19, 2015. JAY JANNER / AMERICAN-STATESMAN

The University of Texas might soon have a beef with internet sensation #SaltBae.

For the uninitiated, the man we’re referring to is chef and butcher Nusret Gökçe. The owner of Turkish steak house Nusr-Et earned his Twitter nickname through a series of sensual food videos that recently went viral.

The video below shows most of what you need to know, but if you’re still confused the above link should fill in the rest. Fair warning to vegetarians and meat-lovers alike: His videos should not be watched on an empty (or full) stomach, and are definitely not PETA-approved.

Even Dell is in on it.

We went BIG in 2016 and after winning multiple awards and mentions at #CES2017 we couldn't help but start 2017 feeling a bit extra #Saltbae pic.twitter.com/CpdD51wqi1

So where do the Longhorns come in? Ah, you thought this couldn’t get any more bizarre.

Check out the below video, posted to Instagram by Nusr-Et Steak House about two months ago. Try not to get distracted by the delicious-looking buns (it’s hard, we know). If you can make it until the end, you’ll catch about a one-second glimpse of what appears to be the restaurant’s logo.

As Texas fans are well aware, that’s the iconic Longhorn Silhouette. Which brings a whole new meaning to world-famous, right? This chain boasts locations from Istanbul to Dubai. Could our beloved #SaltBae be in violation of UT’s copyright?

To be clear, the logo does not appear on the restaurant’s website so it is possible it’s outdated. Plus, we have a possible solution to this predicament that won’t require #SaltBae to pull out his checkbook.

Just send over a few hundred thousand of those perfectly-glazed buns, and have them here by the beginning of September. Lord knows we have plenty of meat to put on them, and they’d make the perfect addition to any tailgate.

Full marks to the first member of Longhorn nation to impersonate #SaltBae when throwing burgers on his or her portable grill. Just make sure it gets on Instagram.

Who would win the all-time matchup? Texas men versus West Virginia