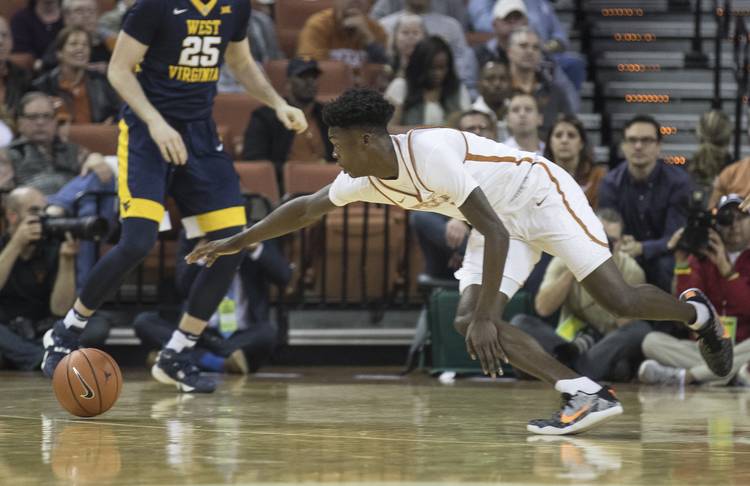 Texas guard Andrew Jones battle for the loose ball against West Virginia in the first half of the NCAA game on Saturday Jan 14, 2017 at the frank Erwin Center. RICARDO B. BRAZZIELL/AMERICAN-STATESMAN

Even without their leading scorer, the Longhorns came ready for the first of three consecutive games against top-10 opponents.

However, No. 10 West Virginia had just enough juice to slip past Texas 74-72 on Saturday at the Erwin Center.

The Longhorns (7-10, 1-4 Big 12) were without sophomore Tevin Mack, the team’s leading scorer. Mack (14.8 points per game) is suspended indefinitely for an undisclosed violation of team rules. Coach Shaka Smart made the announcement to bench Mack on Thursday.

On a day Texas needed its guards to step up, freshman Andrew Jones answered the bell. The 6-foot-4 guard tied his season high with 17 points and four made 3-pointers. His long-range jumper from the right wing tied it up 60-60 with 6:51 remaining.

The clock was not UT’s favor at all in this one. Davis burned the team’s last timeout with 5:39 remaining after getting stuck with the ball right in front of UT’s bench. Roach was called for his fourth foul with 3:52 remaining. Jones fouled out just seconds later. West Virginia did its share of fouling, too, and Texas took advantage by going 18 for 23 at the stripe.

Graduate transfer Mareik Isom transferred to Texas from Arkansas-Little Rock simply to play his final college season close to home. The Austin native and Bowie graduate finally made his season debut against West Virginia, the 17th game of the season. He missed November and December with a complicated ankle injury. Isom finished with only one missed shot in three minutes.

The Longhorns spent most of the first half brushing off the Mountaineers’ vaunted press. Most of UT’s 10 first-half turnovers came in half-court offensive settings, not in transition. But the ship started taking on water in the last three minutes. Roach got trapped in the corner for a turnover, and Davis threw the ball away on inbound pass just before halftime. WVU capitalized with a 12-0 run and took a 39-34 lead at the break.

Baylor is most likely going to lose its No. 1 ranking when the Associated Press Top 25 poll is updated on Monday. But the Bears aren’t going to fall too far. Coach Scott Drew’s club was 15-1 overall going into Saturday’s game against Kansas State. It’s still going to be a difficult challenge for Texas when the two teams meet at 6 p.m. Tuesday at the Ferrell Center.

LOOK: Photos of Texas recruits on their official visit to the 40 Acres