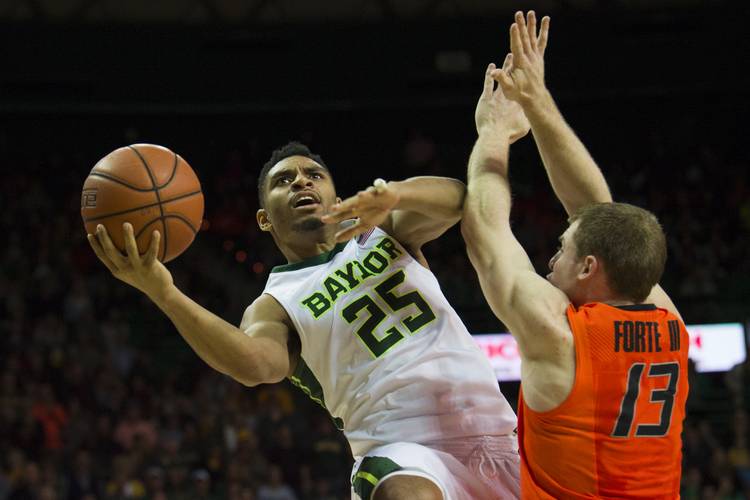 Al Freeman (25) of the Baylor Bears drives to the basket against Phil Forte III (13) of the Oklahoma State Cowboys on January 7, 2017 at the Ferrell Center in Waco, Texas. (Photo by Cooper Neill/Getty Images)

About the Longhorns: Just as he did against West Virginia, coach Shaka Smart will likely have to utilize a seven-man rotation. G Kendal Yancy (ankle) is out, even though Smart said, “I’m champing at the bit to get him back in there.” F Tevin Mack remains suspended indefinitely. … Freshman Jarrett Allen was named the Big 12’s co-newcomer of the week on Monday for his last two games. Allen averaged 18.5 points, eight rebounds and two blocks against TCU and West Virginia. This was Allen’s first award from the league office. … Smart said F Shaq Cleare’s body responded well to playing 33 minutes on Saturday. Last season, Cleare would need days off after big games. After incorporating more cardio, the 280-pounder said he simply feels better on a daily basis.

About the Bears: Baylor’s climb to the No. 1 spot in college basketball took decades. It didn’t last long, though. After losing to West Virginia and beating Kansas State, the school fell from the top spot in this week’s Associated Press Top 25 poll and landed sixth. It was thought No. 2 Kansas, UT’s opponent on Saturday, would move up into the top spot. But the Jayhawks remained second. … Coach Scott Drew’s club had some fantastic, physical battles with last year’s Texas team, a squad full of seniors that liked to mix it up on occasion. F Johnathan Motley (14.8 points, 9.1 rebounds) is back this year and close to averaging a double-double. … F Ishmail Wainright still has quick hands. He leads the Bears with 29 steals. F Jo Lual-Acuil Jr. leads the Big 12 with 3.1 blocks per game.