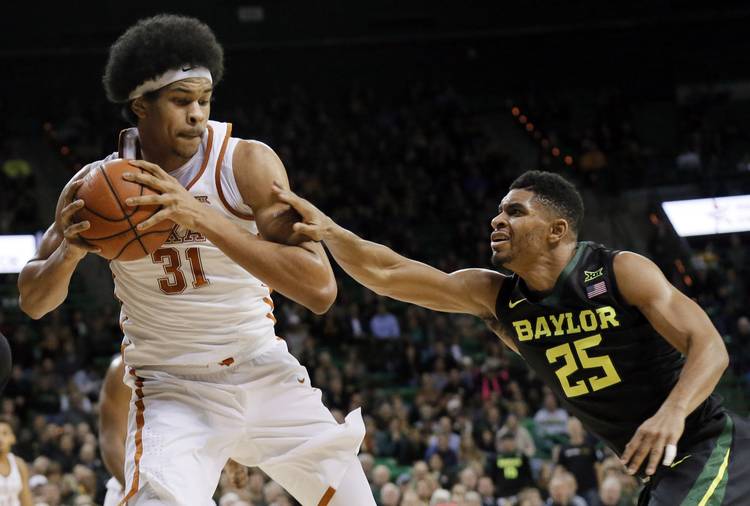 WACO — The Longhorns had been in every Big 12 game thus far, with several being decided on one or two possessions. Not Tuesday night against sixth-ranked Baylor, though.

The Longhorns’ big men found themselves in foul trouble all night long and the Bears ran away with things in the second half for a 74-64 victory at the Ferrell Center.

Texas senior Shaq Cleare tied his career high with 14 points. But he fouled out with more than 10 minutes left. Baylor’s Johnathan Motley simply had his way inside for 32 points and 20 rebounds in one of his best games of the season. ESPN Stats said it was only the second 30/15 game of any player among the major conferences this season.

Texas (7-11, 1-5 Big 15) missed practically everything from beyond the arc and couldn’t keep up after halftime. Jo Lual-Acuil Jr. threw down an alley-oop dunk after getting behind the UT defenders. Jake Lindsey followed with a runout layup, and Motley threw down a vicious one-handed dunk on Jarrett Allen, giving Baylor a 10-point lead.

Give all the credit to Motley, the 6-foot-10 junior from Galena Park North Shore. He was a driving force inside, getting Texas in all kinds of foul trouble. He finished the game 12 for 19 and put up the most points any opponent has scored against Texas all season. In fact, it was one point shy of tying the opponent high in the Shaka Smart era. Oklahoma’s Buddy Hield had 33 against Texas on Feb. 27, 2016.

Baylor has always presented physical matchup problems. Rico Gathers, who spent the football season on the Dallas Cowboys practice squad, loved to hammer anyone and anything wearing burnt orange. James Banks had four fouls and Allen had three with more than 12 minutes left. It wasn’t like there was a major foul disparity, though. Both teams had 14 fouls with 11:57 remaining as Baylor led by 12.

Cleare had one of his best 20-minute stretches as a Longhorn in the first half. The 6-foot-8 senior showed terrific touch on some post moves and caught a difficult pass from Roach for another bucket. Cleare finished the first half with 10 points on 4 of 4 shooting with three rebounds. He got four more points after the break, tying his career high of 14 set against Baylor last season. But Cleare fouled out with 10:42 remaining.

Texas simply couldn’t get anything going from 3-point range. The Longhorns missed 11 of their first 12 shots from beyond the arc. Andrew Jones swished a 3-pointer from the left wing that gave Texas an early 19-15 lead. Then the drought began. The Horns missed their next 17 3-point shots for a new season-low 10.5 percent. The previous low was an eyesore, too. The Horns made just 2 of 18 (.111) against Kent State on Dec. 27. Eric Davis finally connected on another 3-pointer with 18 seconds left as UT finished the night 2 for 19.

From a fan perspective, it’s the best road trip of the season — Allen Fieldhouse in Lawrence Kan. From a basketball perspective, well, life has been extremely difficult for the Longhorns in the Phog. No. 2 Kansas captured its 17th straight win on Monday against Iowa State. This isn’t the same dominate KU squad, though. Coach Bill Self’s team has struggled at times, especially on the road. Expect a full house at full volume.