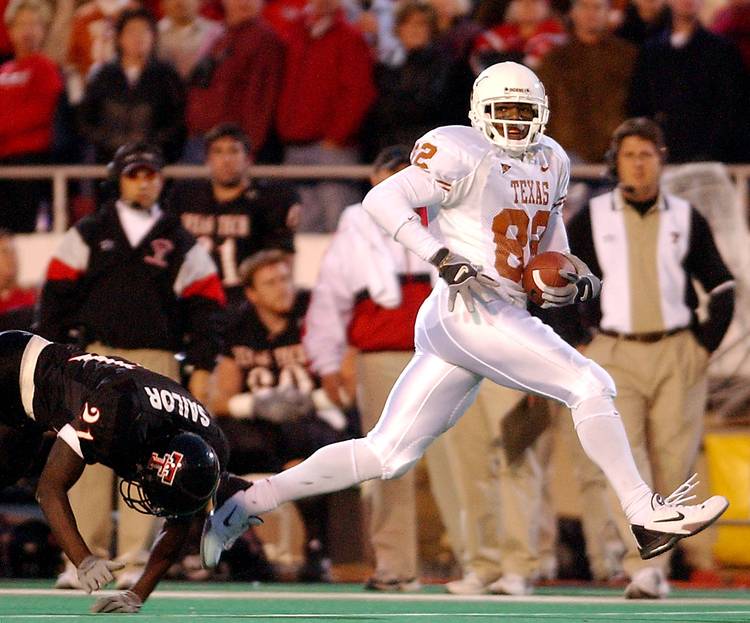 Deborah Cannon/American-Statesman Texas' B.J. Johnson runs past Texas Tech's Ricky Sailor after catching an 84 yard pass from Chris Simms in the fourth quarter. Johnson scored on the run but Texas still lost to Tech 42-38 in Lubbock, Texas on Saturday, November 16, 2002.

Mack Brown, aka Mr. February, is one of the greatest recruiters in the history of college football, not just Texas football. Brown routinely landed top five classes during his time at Texas and used a marvelous stretch in the early 2000s that yielded back-to-back Rose Bowl wins and, of course, a National Championship.

Here are the five highest-rated (per 247Sports composite rankings) recruits Mack Brown landed out of high school from 2000-2013.

Gray was the No. 6-rated player in the nation, No. 2 player in the state (No. 1 being Mario  Edwards who went to Florida State and was a second round pick in 2015) and the No. 1 running back in the nation. Gray’s high school career is one of the best in the history of Texas. He was the 2011-12 Gatorade National Football Player of the Year while setting a national record for rushing touchdowns (205) and tied nationally for the most 100-yard rushing games in a season (played 16 games, rushed for more than 100 yards in 16 games). He started four years for Aledo and rushed for (get ready) 10,889 yards.

Obviously Gray’s college career never matched his high school career, but injuries were the cause. An Achilles tendon tear as a sophomore threw his college career off track. Nagging injuries his senior year kept him off the field. Another Achilles injury while training for the NFL Draft has stalled his pro chances.

Johnson was the top recruit in the state of Texas. He rated above two Texas teammates, quarterback Chance Mock and receiver Roy Williams. This was a standout class for the Longhorns as they landed five of the top 10 players in the state of Texas including three receivers in Johnson, Williams and Sloan Thomas. Johnson was the No. 7-rated player in the country in 2000 and the No. 2 receiver, Charles Rogers (former No. 2 pick in the NFL Draft) was the top-rated receiver.

At Texas, Johnson caught 152 passes for 2,389 yards and 16 touchdowns. After a brief stint in the NFL, Johnson now makes vodka with Williams.

Like the next two players on this list, Jeffcoat did his best to match his recruiting ranking while on campus. Before being the Big 12 Defensive Player of the Year, he was the No. 1 rated player at his position, the No. 1 player in the state of Texas (beating three future teammates in Mike Davis, Reggie Wilson and Darius White) and was the No. 5 player in the nation (No. 7 was future teammate Jordan Hicks).

Jeffcoat had some football pedigree as his dad Jim played for the Dallas Cowboys from 1983-1994 and the Buffalo Bills from 1995-1997 before becoming a coach in the NFL and college ranks. Jackson won the Ted Hendricks Award in 2013 along with Big 12 Defensive Player of the Year honor and was an All-American. He went undrafted and has spent time with the Seattle Seahawks, Washington Redskins and Cleveland Browns.

Kindle was the No. 4 recruit in the nation behind Andre Smith and Percy Harvin (two future first round picks) and Vidal Hazelton (he was on the Edmonton Eskimos in 2016). Kindle was also the No. 1 player at his position and in the state (No. 2 was quarterback Matthew Stafford, who Mack Brown may have wanted at safety… we kid, we kid).

Kindle was a force in high school. He was a Parade All-American and recorded 411 tackles in high school while also rushing for 5,632 yards and 86 touchdowns in his career. At Texas he was a finalist for the Butkus and Hendricks award his senior year and recorded 16 sacks in his career. He was a three-time All-Big 12 selection and an All-American in 2009.

A possible promising NFL career with the Baltimore Ravens was dashed after the second round pick of 2010 NFL Draft suffered a scary injury when he fell down stairs and fractured his skull. Kindle made his NFL debut in 2011 but was cut by the Ravens in October 2012. Kindle now lives in Austin.

Yes, the best and most important player of the Mack Brown era is the also the best recruit he ever brought to the 40 Acres. Young was the No. 1 player in the class of 2002 nationally. Lorenzo Booker (Florida State) and Ryan Moore (Miami, Fl.) were No. 2 and No.3 nationally. The second best quarterback in the class was Marcus “Michael’s little brother” Vick and the No. 2 player in Texas was fellow Texas recruit Rodrique Wright (who is actually the No. 6 highest rated-player Mack Brown ever brought to Texas).

Young is a Texas High School Football Hall of Famer, Texas hall of honor member, MVP of the 2006 Rose Bowl, No. 3 pick of the 2006 NFL Draft, 2006 NFL Offensive Rookie of the Year, 2-time Pro Bowler, 2009 NFL Comeback Player of the Year and winner of the Maxwell, Manning, Griffin and O’Brien awards in 2005. His No. 10 jersey is retired.

(That sound is Vince Young dropping the mic on this list)

Golden: Shaka Smart has to be excited about the future with addition of Matt Coleman