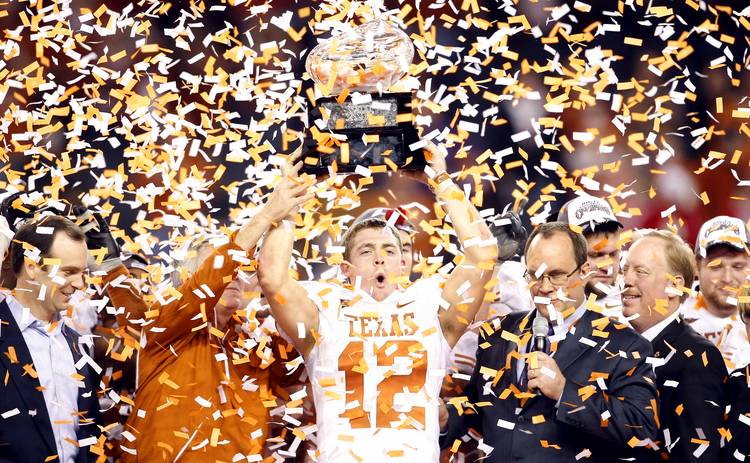 University of Texas Colt McCoy celebrates a win 13-12 against Nebraska during the Big 12 Championship game on Saturday in Arilington, Texas at the Cowboys Stadium December 5, 2009. (Ricardo B. Brazziell/American-Statesman)

The best football programs in the country are littered with four- and five-star prospects, and Texas is no different. Throughout its history, the 40 Acres has attracted the best and brightest from the high school ranks.

Not all college football stars were recruiting stars, however. Below is a list of overlooked prospects who ended up at Texas and made their presence felt.

When Mack Brown arrived at Texas in 1998, he had to quickly build his first recruiting class. Wilkins, a product of Westwood High School in Round Rock, was his very first commitment. An overlooked linebacker, he took advantage of sparse opportunities all the way through his senior season. According to a 2009 story by Horns Digest, Wilkins played in 49 games but never started for the Longhorns. Nonetheless, he forged a six-year career in the NFL that included stints with the Green Bay Packers, Cincinnati Bengals and Atlanta Falcons. He still never started, but ended up having the longest career of any of his fellow 1998 recruits.

At the time, Mack Brown’s 2002 recruiting class was widely considered to be one of the school’s best ever. Given what the group accomplished, it’s hard to argue. Vince Young was the headliner, and wound up becoming every bit the star he was expected to be. Robison, the little-known linebacker from tiny Splendora, ended up being an important cog of a national championship defense. After switching to defensive end, he led the 2005 squad with 13.5 tackles for loss. The Minnesota Vikings selected him in the fourth round of the 2007 NFL Draft, and he started all 16 games for the team this past season.

Priest Holmes didn’t have the pedigree of a typical Texas running back. He wasn’t the biggest, or the fastest, or the strongest. And he wasn’t the most sought-after coming out of San Antonio Marshall. “I thought he was better than what some of the college people thought,” former Marshall coach David Visentine told B.J. Kissel of Chiefs.com in 2014. Holmes made himself a legend in leading Texas to an all-time upset of No. 3-ranked Nebraska in 1996, then became an even bigger star with the Kansas City Chiefs.

Recruiting rankings weren’t quite what they are now in 2001, but they still existed. One of the greatest defensive backs in Texas history didn’t even make the top 100 put out by Rivals or ESPN. He wasn’t among the top 25 defensive backs, either. Yet Huff made an instant impact once he got to Austin, starting as a freshman. He won the Jim Thorpe Award as the nation’s top defensive back in 2005. He was selected seventh overall in the 2007 NFL Draft and played nine seasons.

Colt McCoy from tiny Jim Ned High School in Tuscola, Texas. It wasn’t that recruiting services didn’t know how good McCoy was. They likely didn’t even know who he was. Coming out of Class 2A in West Texas, McCoy said the Longhorns only started recruiting him after he attended one of their camps with a friend. That friend’s name? Jordan Shipley. More than 13,000 passing yards and 112 touchdowns later, Longhorns fans are glad McCoy showed up when he did.

Diamond Dust: How much stock should Texas take in preseason polls?