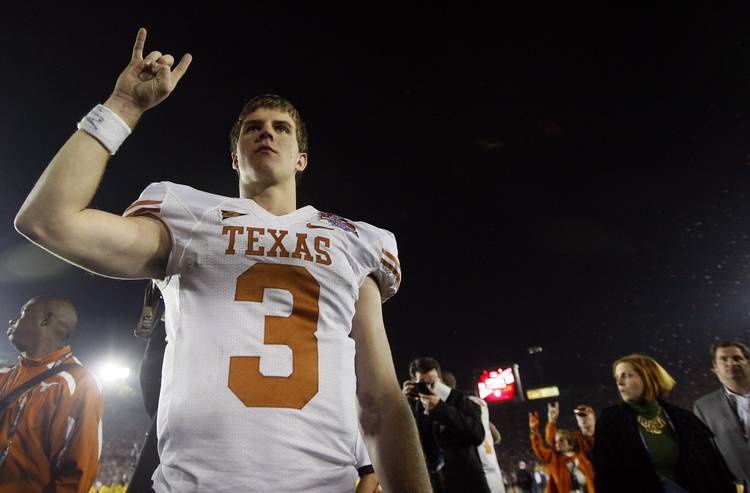 Sometimes it doesn’t always work out after signing day. Whether it’s a just a bad fit, or another player emerging on the scene, sometimes players just need a change of scenery.

Here are the five highest-rated players to sign, play then transfer out of Texas.

Snead is the No. 33 highest rated recruit to sign with Texas since 2000. He was the No. 2 dual-threat quarterback in the nation behind some dude named Tim Tebow. The Parade All-American led Stephenville to a state title game appearance and was 23-2 as a starter in high school.

One problem: the Class of 2005 Texas haul included Colt McCoy, who redshirted during the national championship season, beat out Snead for the starting quarterback job in 2006 and went on to become one of the best quarterbacks in college football history. Snead transferred at the end of his true-freshman season and enrolled at Mississippi in 2007. He sat out 2007 season, took over in 2008 as the starter and his two seasons as the starting quarterback Snead put in the sixth and eighth most single-season passing yards in school history. He is the 6th all-time leading passer at Mississippi, and he did it in just two seasons.

Had he left for the NFL following his junior season Snead may have been a first-round pick. Instead he stayed for his senior year and wound up not getting drafted at all in 2010. He spent some time with the Tampa Bay Buccaneers in 2010, but he doesn’t play football anymore.

Another Class of 2006 product left the Longhorns. Webb is the No. 31 highest-rated recruit to come to Texas since 2000 (all the players on this list are in the top 35 since 2000). Webb was the No. 31st ranked player nationally. The No. 2 offensive tackle nationally and No. 5-rated player in the state, one notch above Snead. A giant man at 6-foot-7-inches tall and 333 pounds, Webb still plays in the NFL today, starting three games for the Seattle Seahawks this year before suffering a knee injury. Seattle released him in November.

Webb’s reason for transferring was so he could play more.

He left Texas after one season and transferred to Navarro Junior College. Then he transferred to West Texas A&M in 2008 before being a seventh-round pick by the Chicago Bears in 2010.

James was the crown jewel of a 2013 recruiting class that was supposed to reshape the offensive line situation at Texas. His class featured Rami Hammad, Desmond Harrison, Kent Perkins and Jake Raulerson. Only Perkins stayed at Texas for four years.

James was the top player in the 2013 class for Texas. The No. 30th-rated recruit since 2000, James was the No.1 offensive guard in his recruiting class, the No. 5 in the state of Texas, one notch above Perkins, and a 5-star recruit. James started games against Oklahoma and Baylor in 2014, but in the spring of 2015 coach Charlie Strong said he was not with the team during spring football due to academic reasons. In May of 2015 he announced he was transferring and later that month chose Auburn.

In October, James received his first start for Auburn at left tackle. He’ll be a senior next season.

White is one of the bigger recruiting busts of the Mack Brown era and at Texas. The No. 27-rated player in his class, the No. 4-rated player at his position and the No. 4-rated player in Texas, White rated above receivers Kenny Stills, DeAndre Hopkins and Martavis Bryant. In Texas, White rated above first-round picks Jake Matthews, Luke Joeckel and Cedric Ogbuehi (side note: Texas A&M had three NFL first round offensive tackles in one class).

White’s college numbers during his time at Texas and Missouri, where he transferred to in December of 2011: 519 yards receiving.

Everyone missed on White. He was a Parade All-American who caught 93 passes for 2,293 yards and 35 touchdowns at Dunbar. The Star-Telegram profiled him in 2015.

Oh, you knew it was coming.

Gilbert is the 16th highest-rated recruit to come to Texas since 2000 and arrived as one of most prolific quarterbacks in high school football history. Oddly enough, though, he was not the top quarterback in his class. That honor belonged to Matt Barkley of USC, but Gilbert did rank above Tajh Boyd and No. 7 on the list is one A.J. McCarron, who won two national titles at Alabama. Gilbert was the third highest-rated player in Texas that season, behind LSU recruits Russell Shepard and Craig Loston, but overall Gilbert was No. 14 in the nation.

He graduated early, joined the Longhorns in the spring of 2009, served as Colt McCoy’s back-up in 2009, famously came in against Alabama in the national title game and played well enough to earn some hype entering 2010. That didn’t work out. Gilbert was not good his sophomore year. In fact, the season was so bad that coach Mack Brown announced at the end of the 5-7 season that all positions here being opened up and Gilbert was going to compete with Case McCoy, Connor Wood and David Ash for the starting job. He won the job but lost it on Sept. 12 and underwent shoulder surgery on Sept. 20.

On Oct. 5, Texas granted Gilbert his release from his scholarship. He graduated from Texas, then transferred to SMU where, in 2013, he threw for 3,528 yards and 21 touchdowns. He is now in the NFL, signing a contract with the Oakland Raiders earlier this month.