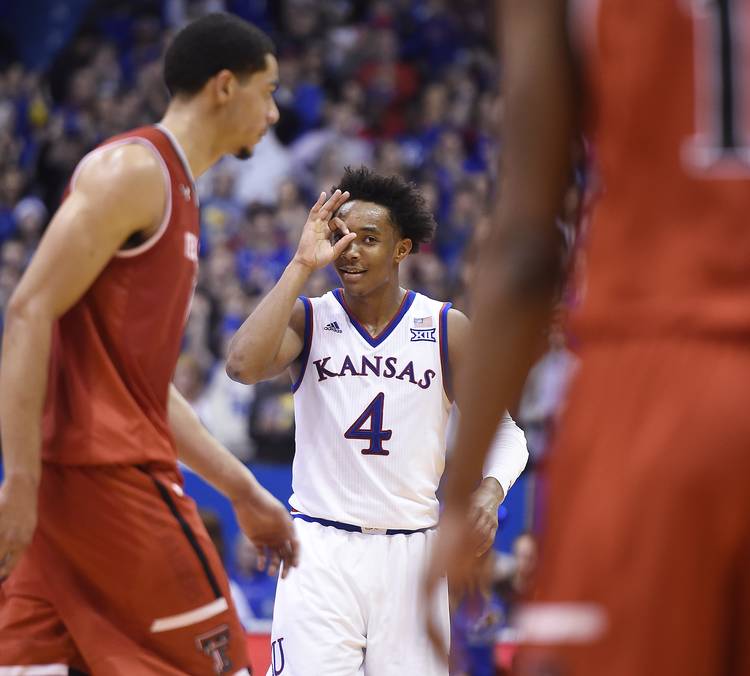 Devonte' Graham of Kansas celebrates a 3-pointer against Texas Tech during the second half at Allen Fieldhouse in Lawrence, Kan., on Saturday, Jan. 7, 2017. Kansas won, 85-68. (Rich Sugg/Kansas City Star/TNS)

About the Longhorns: Saturday’s game marks the first time in school history that UT has faced three consecutive top-10 ranked opponents. Texas lost to No. 10 West Virginia last week and lost to No. 6 Baylor on Tuesday. … F Shaq Cleare has been showing nice touch around the rim in recent games and tied his career high with 14 points against the Bears. Using a mix of baby hooks, soft jumpers and put-backs, Cleare went 6 for 10 from the floor. He’s shooting 53 percent in six Big 12 games so far. … G Kendal Yancy (ankle) played 10 minutes on Tuesday and said he felt fine afterward. … G Jacob Young is 2 for 14 shooting from 3-point range in the last five games. His single-game high was three made 3-pointers against Alabama on Dec. 2.

About the Jayhawks: Coach Bill Self’s team is the only Big 12 squad still undefeated in league play. The Jayhawks are searching for their 13th consecutive conference championship. Self’s club is currently riding a 52-game home winning streak. … G Frank Mason III will be among those discussed for national player of the year honors. He leads the Big 12 in scoring (20.3) and has led Kansas in that department in 15 of 18 games. He’s also shooting a Big 12-best 53.8 percent from 3-point range. … This current squad has the fourth-highest scoring average (85.8) of any team in Kansas history. … G Devonte’ Graham has started heating up. He’s made 14 of 33 shots from beyond the arc in the last four games. This was after going 1 for 15 in the three games prior.

Tom Herman: Longhorns not expecting to add another QB for 2017

Countdown to Signing Day: Top 5 Texas recruits who lived up to their ranking