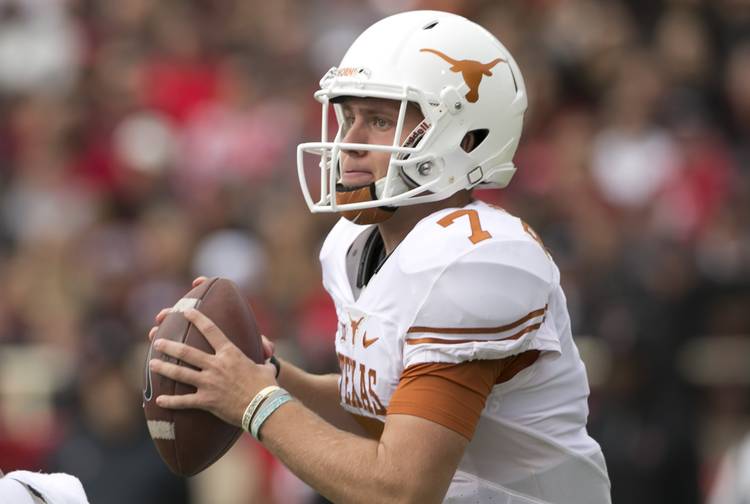 Texas coach Tom Herman said Friday he does not expect to bring in another quarterback prior to next season, opting to stick with Shane Buechele, Matthew Merrick and incoming freshman Sam Ehlinger.

“We don’t have a lot of numbers,” Herman said during a radio interview on 104.9 The Horn. “We are a bit thin there. I don’t see us adding to that room this year. Obviously next year we’ll sign a quarterback, if not two, in the 2018 class. I feel great.”

Of Herman’s three choices, only Buechele has any game experience. He started all 12 games as a freshman last season and completed 60 percent of his passes for 2,958 yards with 21 touchdowns and 11 interceptions.

“Again, I have not watched one single snap of game film from last year simply because I want to make sure that every player earns their respect through the winter conditioning and offseason and earns their place,” Herman said. “There are no starters. There is no depth chart right now. Those places will be earned through how hard they work and how accountable they are through this winter conditioning.

Herman said he feels good about the talent in the quarterback room. “We just probably, in the next year or two, need to make sure that we have the depth that’s necessary,” he said.

“I’ve known Casey for 18 years,” Herman said. “He had some uninformed and regrettable tweets that he’s apologized for, and I’m fully confident that he is in alignment with what our vision is at the University of Texas and will prove to be a very valuable member to our staff. We’ve moved on.”

The overwhelming interest and blowback about Horny’s hiring probably caught Herman off guard. Herman said former UT coach Mack Brown used to say “there’s tens of millions of people who care deeply and passionately about your program,” which could be a blessing and a curse.

“It’s a bit foreign to me to have that vested of an interest,” Herman said. “It’s almost like it’s a reality TV show that these people derive their entertainment even in the offseason and off the field through the following of our program and often times, because of it, create your own narrative to create drama in that reality TV show. So that’s foreign to me. I don’t think it surprises me. It seems a bit odd.”

Herman said fans don’t get on message boards and “tell a surgeon where to cut on a human body or tell a lawyer that, no, you tried that case the wrong way.”

“This is one of, if not the, most strong brands in college football and the support is unlike any other in the country,” Herman said.

During Monday’s luncheon with the UT players’ families, Herman did say that he encouraged parents to come straight to him or the assistant coaches if problems arise.

“Our dirty laundry can’t be aired to the media or to social media or anything like that,” Herman said. “I just said that if you have any issues with your player or our program to call me or call your son’s position coach and keep all of our family business within the family. The only way to achieve excellence and championships is to be completely aligned and familial as possible.”

Herman estimated that UT officials have already approved $10 million in upgrades around the football complex. His first priorities were to renovate and reorganize the weight room and get new decorative graphics on the walls to give the building a modern feel. Herman credited Perrin and UT President Gregory L. Fenves for being supportive in approving the upgrades.

Men’s preview: Texas at No. 2 Kansas