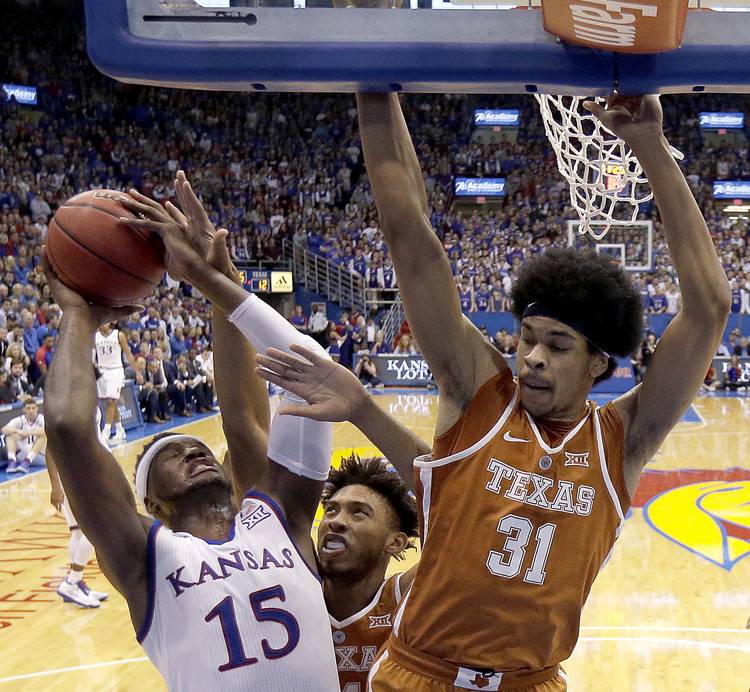 LAWRENCE, Kan. — It takes borderline perfection to beat Kansas inside Allen Fieldhouse, a place where the Jayhawks have won 12 consecutive Big 12 titles and 49 straight games.

Texas freshman Jarrett Allen enjoyed his best game in burnt orange, but collectively the Longhorns struggled at times in what became a 79-67 loss to the second-ranked Jayhawks.

Allen set new career highs in points (22) and rebounds (19). He temporarily left the game with an ankle injury in the second half but returned showing little effects. In the matchup of five-star freshmen, Allen definitely got the better of Kansas’ Josh Jackson, who had 15 points and five rebounds but was largely a role player.

There’s no question the 6-foot-11 big man from Round Rock was the star for Texas. Coming into Saturday’s game, Iowa State’s Chuck Duncan holds the opponent record with 22 rebounds grabbed against Kansas in Allen Fieldhouse in 1995. Allen fell three shy of that incredible mark.

Kansas started the game 7 for 11 from 3-point range, just two shy of tying the school record for made 3-pointers in a half. Devonte’ Graham had three himself en route to 15 first-half points. One of the best long-range shooting teams in basketball, the Jayhawks were happy to collect 3-pointers while the Longhorns got points in the paint. Allen and Shaq Cleare were 9 for 14 shooting in the first half, but Texas still trailed 41-33 at the break.

Eric Davis Jr. and Andrew Jones weren’t overwhelmed by Kansas’ experienced backcourt duo of Frank Mason III and Graham. Davis had 12 points on 3 of 9 shooting. Jones had 12 points, five assists and threw down an incredible two-handed dunk with 3:27 left.

The first four-plus minutes was comical. Cleare turned it over three times in UT’s first four possessions. Allen had two bad passes that went the other way, too. In the first 4:38, the Longhorns had two points, four shots and six turnovers. It was unbelievably bad basketball and set a terrible tone for the day. Fortunately for UT, the Horns steadied themselves after the first media timeout and started to play better.

Oklahoma proved to be a completely different team with and without Jordan Woodard. The 6-foot senior guard was sidelined for an undisclosed medical issue. He returned against Texas Tech and OU looked like a different team. Woodard had 27 points against Tech, and then scored 20 in an 89-87 upset over West Virginia. Still, the Sooners are Longhorns are both in the lower half of the standings. Not exactly the ideal matchup ESPN had in mind putting this game on “Big Monday.”

Countdown to Signing Day: Highest-rated Longhorn football recruits from out of state