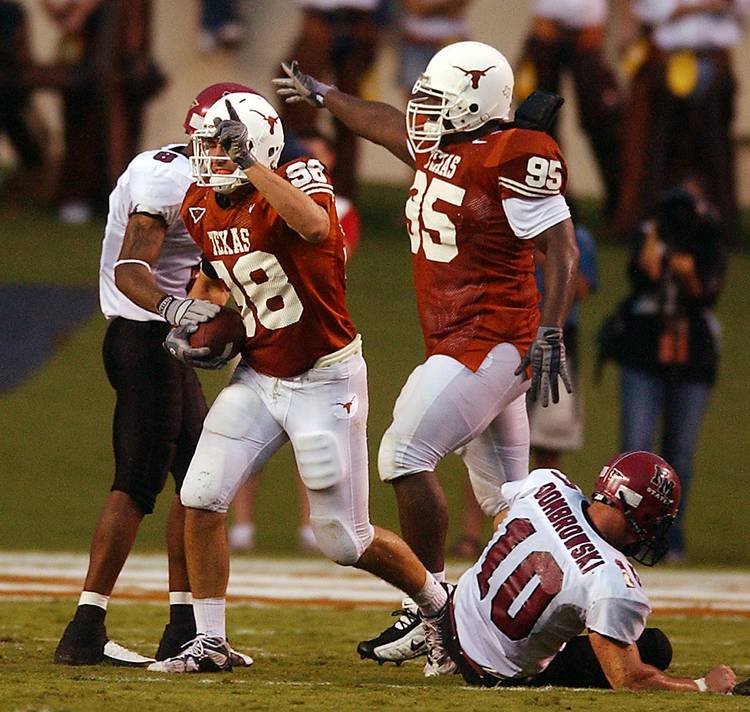 Texas shouldn’t have to leave the state of Texas for high-profile, dynamic, awesome football players.

Here are the five highest-rated recruits since 2000 not from Texas.

Cobbs spent five years on the 40 Acres. The 2010 Parade All-American suffered an injury at the end of the 2012 season that caused him to miss all of the 2013 season, but he did play in 42 games with six starts for the Longhorns. He came to Texas, both the school and the state, after playing quarterback, running back, wide receiver, safety and kick return in high school. He started his career as a defensive back at Texas but moved to linebacker in 2011.

An awesome tidbit on Cobbs: Dude was a great recruiter. He played a hand in convincing fellow 2010 Under Armour All-American Jordan Hicks (keep reading) in coming to Texas. Then, as a player, he hosted Shiro Davis and Dalton Santos on recruiting visits. His final player he hosted was Malik Jefferson.

Steve “Stevie” Lee played at Texas from 2001-2004 and registered 53 tackles and three sacks in his career. The 6-foot-4-inch, 308 pound tackle was the No. 2-rated player from the state of Louisiana, quarterback Brock Berlin was No. 1, and he was the No. 3 defensive tackle in his class. The No. 57-rated player in the nation, Lee is the No. 41 highest-rated player to come to Texas since 2000.

Since coming to Texas in 2000, he’s stayed in the Austin area and works in real estate.

Doiron was the No. 2 rated player from Oklahoma, behind Wes Sims, and the No. 5 player at his “strong-side defensive end” position. The 6-foot-4-inch end was born in Nacogdoches but moved to Oklahoma when he was in the third grade. He went on to play for Duncan from 1997-1999 and led his team, the Demons, to the Class 4A State Semifinals that year.

Once he got to Texas his brother, Josh, transferred from Kansas State and they two were on the Longhorn roster in 2001 and 2002.

He now lives in The Woodlands.

At 6-foot-6-inches and 215 pounds, Pickryl came in from Oklahoma as a lanky defensive end. He was the No. 28-ranked recruit in his class, the No. 1 at his weak-side defensive end position and No. 1 player from Oklahoma. Oklahoma Sooner standout J.D. Runnels and Oklahoma State standout D’Juan Woods are just two of the players he ranked above in the state of Oklahoma.

The gist: he had 4.5 sacks as a freshman and was a terrific student. He decided to step away from playing football and finished his college career as a member of the team, but one who didn’t play but helped in recruiting and tutoring. He graduated and went to graduate school at Baylor.

Hicks is the top-rated non-Texas player to come to the Longhorns and the seventh highest-rated player to come to Texas since 2000. The 6-foot-2-inch, 220 pound linebacker from the Cincinnati area stunned many in the state when he joined the Longhorns as Hicks was the No. 1 player in Ohio and at his position as well as being the No. 7 player in his class. Hicks had 216 tackles, 8.5 sacks and 36 tackles for a loss at Lakota West, earning Parade and USA Today  All-American honors.

During his five years playing for the Longhorns, Hicks fought through injuries, including a ruptured Achilles tendon. He received a medical redshirt during his junior after a hip injury, then lost his 2013 season to the Achilles injury. In 2014 he started 13 games.

Just this month Hicks received the No. 2 spot on the Statesman’s Longhorn NFL player ranking project. Hicks had 85 tackles and five interceptions this season.

Longhorns in the NBA: Through Jan. 19th