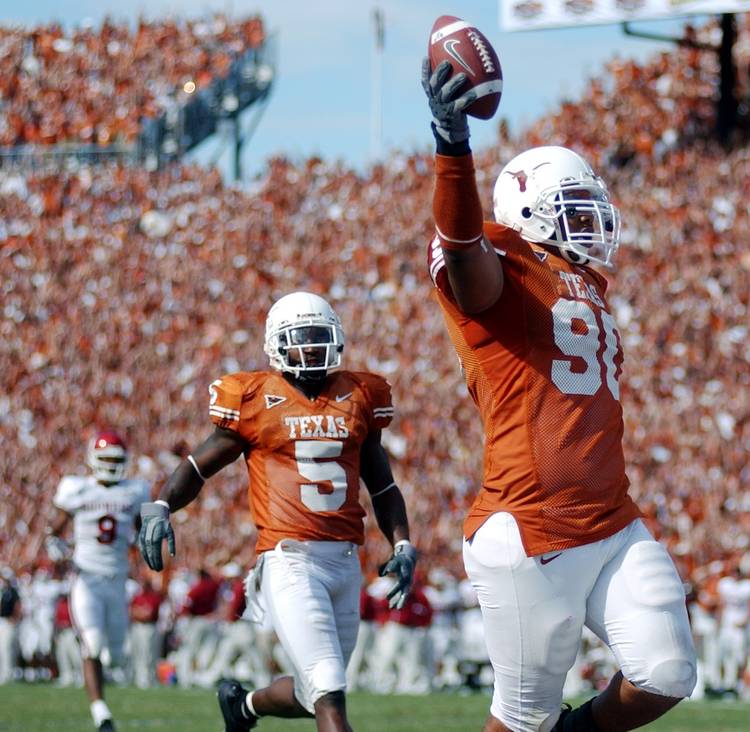 Kelly West AMERICAN-STATESMAN Saturday, Oct 8, 2005 Texas' Rodrique Wright runs into the endzone for a touchdown after recovering a fumble at the Texas OU football game at the Cotton Bowl in Dallas, Texas.

Whether Texas fans want to believe it or not, the Longhorns have done extremely well since the start of the new millennium in recruiting.  Mack Brown’s ability to recruit was the gasoline that powered the Longhorns to Big 12 titles, bowl wins, two championship game appearances and one national championship.

Charlie Strong also recruited at a high level, further making Texas a power in the recruiting game. That hasn’t always translated on the field, but it’s never a bad thing to do well in recruiting.

Last week we counted down the top five players that Mack Brown ever brought to Texas. Four of those players were the No. 1 player at their position. So we’re rounding out the top 10.

Here are the 10 highest-rated Longhorns who were ranked No. 1 at their position during recruiting.

Jefferson is the top recruit Charlie Strong brought in and the No. 1 outside linebacker in the nation when he signed with Texas in 2015. He was the No. 1 player in Texas and the No. 10 recruit nationally. He is the 20th best recruit to sign with Texas since 2000.

The No. 1 offensive tackle in the nation was the No. 16 recruit in the nation when Texas landed the 6-foot-6-inch, 290 pound Walters. He was the No. 4 player in the state,  just behind Longhorn teammate Garrett Gilbert. Other offensive tackles that hailed from this class included Alabama All-American D.J. Fluker (No. 3) and future 2014 first round pick Taylor Lewan, who played at Michigan.

Walters played five years for the Longhorns and started the final 51 games of his career at right guard. That streak of starts was tied for the longest in college football at the end of 2013. He was twice on the Lombardi and Outland trophy watch list. Walters also bulked up at Texas, going to 320 pounds. Walters is not in the NFL.

Jones was the top player at the “weak-side defensive end” position and the No.3-rated defensive lineman overall, behind LSU recruit Al Woods and Oklahoma recruit (and future No. 3 pick in the NFL draft) Gerald McCoy. Other weak-side end recruits included No. 6 Aaron Maybin, a future first round pick who went to Penn State, and No. 2 rated player Ricky Sapp, who played at Clemson. Jones was the No. 3 player in the state of Texas in his class, behind Sergio Kindle and Matthew Stafford.  He earned Parade All-American honors along with USA Today and EA Sports All-American honors.

Jones spent five seasons at Texas and started eight games and appeared in 50 games.  He had 13.5 sacks in his career at Texas. Jones graduated from Texas with a degree in youth and community studies. He spent time with the New York Jets and St. Louis Rams but never moved past the practice squad.

The eighth best recruit to come to Texas since 2000, Allen was the top guard of a class that included Maurkice and Mike Pouncey, who both dominated at Florida and were drafted into the NFL. Allen was ranked 11th overall in his class and the highest-rated offensive lineman in 2007. Quarterback Ryan Mallett was the top recruit in the state of Texas, followed by receiver Terrance Toliver. Mallett went to Michigan and Tolliver to LSU. Oklahoma State recruit Dez Bryan was No. 6 on this list. Allen was a Parade All-American and played in the 2007 U.S. Army All-American Bowl.

Allen was a 5-year player for the Longhorns and played in 44 games. He graduated in 2011 with a degree in physical culture and sports and youth studies. As a senior he started six games at left tackle. After playing in 11 games as as junior, Allen was likely poised to be a starter in 2010, but a foot injury ended his season and he was red-shirted in 2010.

In 2014 Allen played for the Iowa Barnstormers, and in 2015 he taught and coached football at San Antonio Southside High School.

We covered him a few days ago as he is the No. 1 out-of-state recruit to come to Texas since 2000.

The gist: The 6-foot-2-inch, 220 pound linebacker from the Cincinnati was a Parade and USA Today  All-American. He got hurt at Texas which stalled his college career, but now he’s a really a good player for the Philadelphia Eagles.

Not only was Wright not the top player in the state despite being the No. 7 player nationally, he wasn’t even the top player in the Houston area in the class. And he was well aware of it and didn’t bother him. That’s because his future teammate, and Longhorn Legend, Vince Young was playing at Houston Madison. Wright, though, was pretty awesome himself. He rated higher than future All-Pro Haloti Ngata (who went to Oregon) and other future standouts like Michigan’s Gabe Watson and Ohio State’s Quinn Pitcock.  Wright was also the top overall defensive line recruit in a class that included NFL players Tamba Hali and Kamerion Wimbley.

Wright was a seventh-round pick by the Miami Dolphins and played football until 2011, bouncing from the NFL to the Canadian league. Wright spent two seasons as a defensive special assistant at Texas before moving to Sam Houston State where he coached defensive ends for two seasons before taking over as the defensive line coach in 2016.

Gray, Jeffcoat, Kindle and Young were covered here, as they make up four of the highest-rated players Mack Brown landed at Texas.

Shane Buechele considered a Heisman hopeful ahead of 2017 season