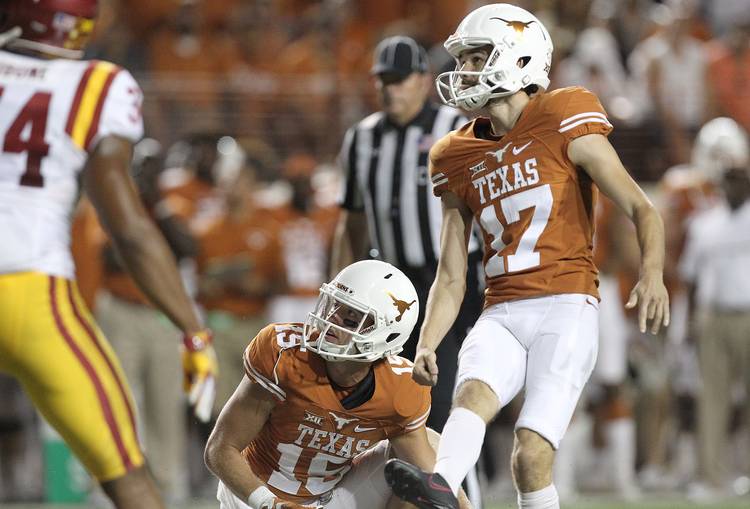 Trey Holtz is going into the family business.

Super excited to start my coaching career in Columbus!! #GoBucks

Trey Holtz, who is the son of Louisiana Tech coach Skip Holtz, is expected to be a graduate assistant coach or quality control assistant coach on Urban Meyer’s staff.  He arrived in Austin in 2012 as a redshirt quarterback, but saw little playing time at Texas — most of his playing time came as the holder for field goals and extra points the last two seasons.

Of course, chances are that coaching is in his genes.

Lou Holtz led Notre Dame to a national title in 1988 and the brink of multiple national titles in the 1990s. He won 249 games at various coaching stops. Skip Holtz has won 119 games in stints at East Carolina, South Florida and now Louisiana Tech.

The Holtz-Urban Meyer connection is strong.

Before Meyer went on to win national championships at Florida and Ohio State, he joined Lou Holtz’s coaching staff at Notre Dame in 1996, and spent four seasons in South Bend before taking his first head coaching job at Bowling Green in Northwest Ohio.

According to Lou Holtz, it was Skip Holtz, then the head coach of then-Football Championship Subdivision member Connecticut, who convinced his dad to meet with Meyer following a coaching clinic. Years later, another Lou Holtz (and Meyer) assistant, Charlie Strong, would be hired as Texas’ head coach, and Trey Holtz would be one of his quarterbacks.

The rest is history, and now, completing the football circle of life, Meyer has hired Skip’s son to his coaching staff.