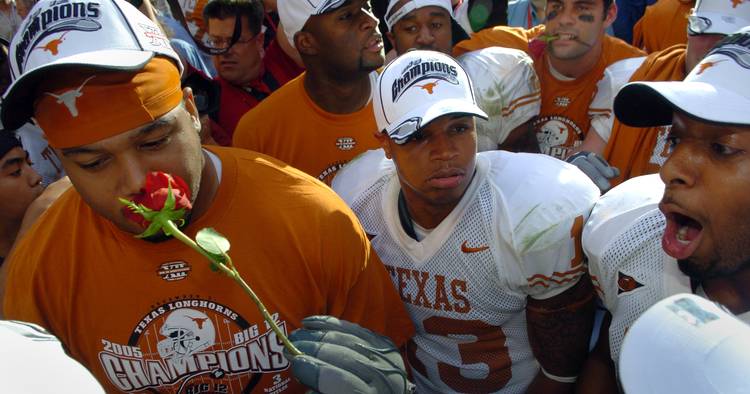 ORG XMIT: TXAUS RODOLFO GONZALEZ/AUSTIN AMERICAN-STATESMAN: University of Texas' #90, Rodrique Wright, left, smells a rose held by teammate #92, Larry Dibbles, bottom left, as the rest of the team celebrates the Longhorns 70-3 victory over the University of Colorado in the Big 12 Championship held at Reliant Stadium in Houston, Tx., on Saturday, December 4, 2005. Texas will face top ranked University of Southern California in the Rose Bowl for the National Championship.

There were no guarantees in 2002, when Texas landed the top recruiting class in the country headlined by No. 1 overall prospect Vince Young at quarterback. Four years later, however, coach Mack Brown and the Longhorns had indeed cashed in.

From that 2002 class all the way through the freshmen who arrived that August, the 2005 Texas roster was littered with prized recruits.

They’re listed here in order of ranking, and it’s amazing how many big contributions these five made both throughout the season and in the 2006 Rose Bowl.

We’d say we gave away the ending, but you already knew where this was headed. See you in the corner of the Rose Bowl.

Role in 2005: Sophomore linebacker, rotated behind Robert Killebrew, played some at safety

Kelson was considered the nation’s top safety recruit out of high school, but played many of his snaps at linebacker as a sophomore in 2005. He made several key plays, which included forcing a Justin Zwick fumble to seal the Longhorns’ win over Ohio State. In the Rose Bowl, he made five total tackles and was credited with a forced fumble on Reggie Bush’s infamous lateral in the second quarter. He also very nearly made an interception (video above). Dan Fouts thought he did, but then again Dan Fouts thinks a lot of things.

Like Kelson, Okam was a sophomore in 2005. He racked up 31 total tackles and 4.0 tackles for loss playing alongside Rodrique Wright (we’ll get to him later). Okam’s only sack of the season could hardly have come at a better time, as he dragged down USC quarterback Matt Leinart to help force a field goal right before halftime of the Rose Bowl.

RELATED: Golden: In 2005, Texas’ big uglies were a thing of beauty

Part of that famed 2002 recruiting class, Blalock was a redshirt junior in 2005. He helped pave the way for 3,574 rushing yards — 1,050 of those by Young. None were more important than the last nine. That’s right, Texas highest-rated offensive line recruit laid the crucial block to spring its highest-rated quarterback recruit to win the national championship.

Unlike Young and Blalock, Wright began his career right away when he arrived in Austin, making him a senior in 2005. He was a consensus All-American, racking up 27 total tackles, 7.5 tackles for loss and 3.0 sacks. He also scored that iconic big-guy touchdown during the Longhorns’ 45-12 romp of Oklahoma at the Cotton Bowl. The box score shows he didn’t record a single tackle in the Rose Bowl, but he was still a key piece of the championship run.

As we outlined in our list of the top five Texas recruits who lived up to their ranking — Young was No. 1 there, too — the 6-foot-5, 200-pound quarterback arrived in Austin with the promise of the No. 1 overall recruiting ranking attached to his name. By delivering Texas its first national championship since 1970, he forever etched that name in the pantheon of Longhorns greats. He also had an ensemble of prized recruits to help get him there.