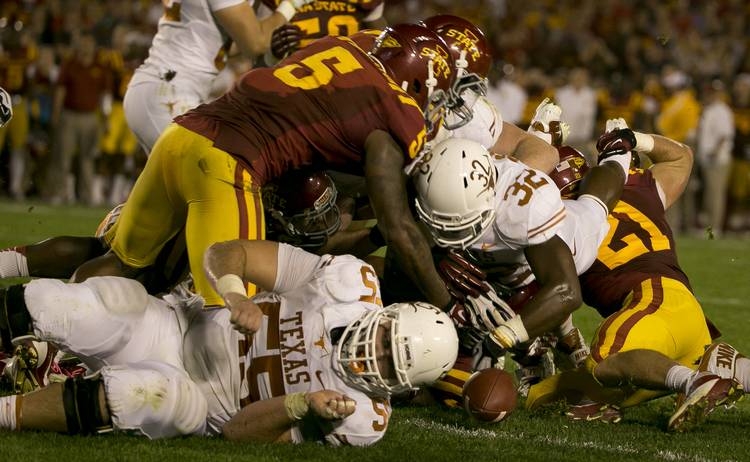 Texas Longhorns running back Johnathan Gray (32) fumbles the ball on the goal line but recovers against Iowa State in the second half an NCAA college football game at Jack Trice Stadium in Ames, Iowa, on Thursday, Oct. 3, 2013. (RICARDO B. BRAZZIELL / AMERICAN- STATESMAN)

Texas officials announced Thursday that next season’s matchup against Iowa State has been moved up to Thursday, Sept. 28, instead of Saturday, Sept. 30.

Broadcast details will be announced at a later date. Thursday night games usually start at 7 p.m., although no official kickoff time has been set yet.

The Iowa State matchup comes after UT’s only bye week of the season and will give the team some extra time to prepare for Kansas State on Oct. 7.

UT’s last Thursday night trip to Ames was a white-knuckle experience on Oct. 3, 2013. The Longhorns won 31-30 thanks to Case McCoy’s quarterback sneak with 1:51 remaining after two consecutive fumbles by Johnathan Gray.

The Longhorns’ only other loss to the Cyclones in the all-time series came in 2015. Iowa State blanked UT 24-0 on Halloween.

Episode 41 of On Second Thought: CBS Broadcaster Jim Nantz on the Super Bowl and how he was almost a Longhorn

Why does Matthew McConaughey live in Austin? The answer is simple