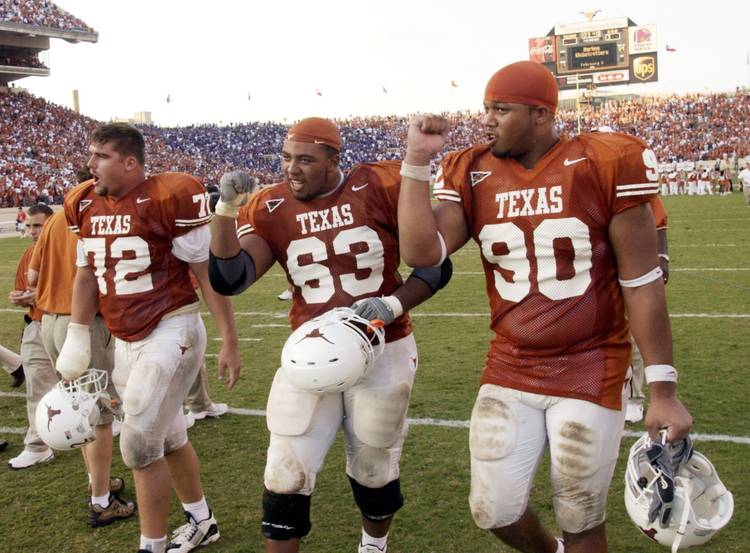 Since 2000 the Texas Longhorns have finished in the top 10 of the 247 Sports Composite rankings 12 times. That’s one more than both  Alabama and Ohio State in the same span. The Longhorns are consistently one of the top programs in the nation (I mean, who doesn’t want to live for 4-6 years in the land of Torchy’s Tacos?) when it comes to recruiting.

We’re focusing on the top 5. Here are five times Texas finished with a top four class.

Alabama was No. 1 on the list, and in the midst of a run that saw the Crimson Tide take the 247Sports No. 1 six years in row and running. In fact, Nick Saban and company can make it seven in a row next week, unless Ohio State can catch them.

In 2012, Texas had two 5-star recruits sign: the No. 1 running back in the nation, Aledo’s Jonathan Gray, and the No. defensive tackle in the nation, Malcom Brown (who is also the last Texas player taken the first round of the NFL Draft).  The real strength of this class was the 19 four-star players who signed. That was four more than Alabama (though Alabama’s three five-star recruits included Landon Collins and T.J.  Yeldon).

RELATED: Top 5 Texas recruits who lived up to their ranking

This class, though, didn’t get anywhere near its expectations. Gray suffered a string of injuries that prevented him from fulfilling his potential, and two of the five highest-graded players in the class, Curtis Riser and Cayleb Jones, transferred. The third highest-rated player, Kennedy Estelle (the No.5-rated offensive tackle of his class) was dismissed from the team and Kendall Sanders, the No. 7-rated cornerback in the class, went through a sexual assault trial before eventually moving on to Arkansas State, where he started eight games last season.

Add in Camrhon Hughes, Bryson Echols, Jalen Overstreet, Connor Brewer and Adrian Colbert, and this class saw many of those 19 four-stars leave the program at some point.

It wasn’t all a wash though. Paul Boyette of Humble became a main-stay on the team and even met his wife, basketball standout Imani, on campus. Hassan Ridgeway was drafted into the NFL last season by the Indianapolis Colts and Daje Johnson, Bryce Cottrell, Caleb Bluiett, Tim Cole, Shiro Davis and Peter Jinkens all contributed or have contributed to the program.

With two five-star recruits, Cibolo Steele running back Malcolm Brown (still the best running back this reporter has seen at the high school level) and the Statesman’s No. 1 Fab 55 prospect Steve Edmond, of Daingerfield High School, Texas ranked fourth behind Southern California, Florida State and No. 1 Alabama.

Texas had 12 four-star recruits, including Quandre Diggs and Cedric Reed. The seven three-star recruits in this recruiting class also became quality players. David Ash of Belton became the starting quarterback and led Texas to within a whisper of a Big 12 title his junior year, and Joe Bergeron of North Mesquite was a contributor in his career.

Brown, Diggs, Mykkele Thompson, Desmond Jackson, Cedric Reed and Jaxon Shipley all are playing or have played in the NFL.

M.J. McFarland, a three-star recruit from El Paso El Dorado transferred to UTEP after graduating in 2014.

Ranking behind a Florida class that landed the same amount of 5-star players (five) but three more 4-star prospects, Texas continued its run of strong classes to start this decade.

Texas has yet to match this class in terms of 5-star recruits during the current decade. Jackson Jeffcoat (Plano West), Jordan Hicks (Lakota West, West Chester, Ohio), Mike Davis (Dallas Skyline), Reggie Wilson (Fort Worth Haltom) and Darius White (Fort Worth Dunbar) were the five top players in the class.

RELATED: 10 times Texas landed the No. 1 player at their position

This class also produced Case McCoy, who spent time as the starting quarterback, and Dominic Espinosa, who was a stalwart on the line for several seasons. Trey Hopkins also went on to become a standout lineman for the Longhorns and is currently with the Cincinnati Bengals practice squad.

Like 2012, there were some misses and players who left. Darius White is one of the bigger recruiting misses of the last 17 years. He was the No. 4 receiver in his class, the No. 4 player in Texas, and the No. 27 player nationally. He transferred from Texas to Missouri but did little at Missouri. Taylor Bible, a four-star defensive tackle, never played at Texas after taking a redshirt and transferring.  This class saw several players join the 2014 Charlie Strong transfer trend, including cornerback Adrian White.

Florida, Southern Cal and Tennessee were the the top three classes this season with USC coming at No. 2 despite six — six!– five-star recruits (including the No.1 player, the late Joe McKnight). Florida wasn’t half bad either, with five 5-stars, including future Pro Bowler Carlos Dunlap (Joe Haden, the future All-Pro corner for the Cleveland Browns was a four-star recruit in this class).

Texas landed two five-star recruits in John Chiles and Tray Allen. But the biggest star of this class, and a player who may one day go down as the best Texas player to play in the NFL, was Earl Thomas. The defensive back from West Orange Stark was only a three-star recruit, but after redshirting took the college football world by storm and was a 2009 All-American. He went pro after his sophomore year and has since been a five-time Pro Bowler, four time All-Pro and a Super Bowl champion.

if you’re in the camp that recruiting lists are “overrated” and don’t matter, this will make you mad. Texas’ No. 1 recruiting class helped the Longhorns win a National Championship in 2005. Four five-star recruits, 13 four stars and a total of 26 recruits were apart of this class.

Naturally the No. 1 recruit in the nation and star of that championship team joined the Longhorns that season, Vince Young. But the Houston Madison star wasn’t the only big-time get. Rodrique Wright and Justin Blalock are all-time great players at Texas. The fourth five-star player was Bryan Pickryl of Oklahoma, who’s career was derailed by Injuries. Looking past the five-stars, Selvin Young,  future Thorpe winner Aaron Ross, main-stay linemen Kasey Studdard and Lyle Sendlein, NFL tight end David Thomas and Chase Pittman were also part of this class.

The amazing thing is that of all the names here, it’s Brian Robison, a three-star recruit from Splendora High School in Texas, who has carved out the longest and most productive NFL career. Robison has been a member of the Minnesota Vikings since 2007 and has 55 sacks and 254 tackles in 149 games. He was a fourth round pick.

Bohls: Why are players giving hugs to one head coach on the 40 Acres?