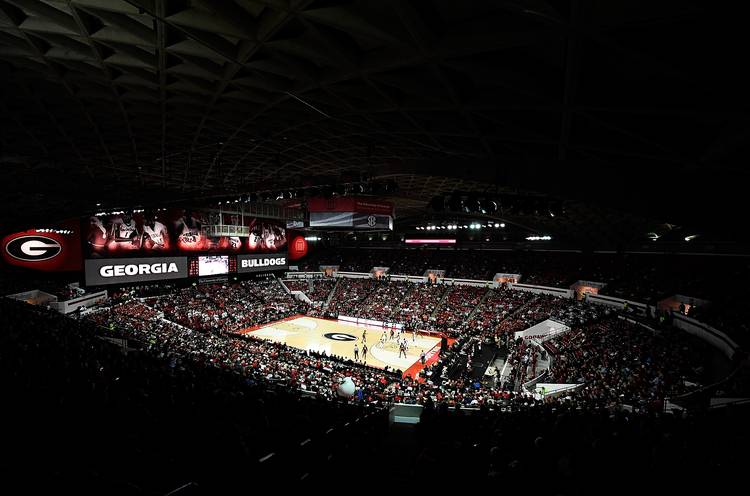 A general view of the Georgia Bulldogs' basketball game against the South Carolina Gamecocks at Stegeman Coliseum on January 4, 2017 in Athens, Georgia. (Photo by Mike Comer/Getty Images)

In four games spanning 12 years, the Longhorns have never worn black uniforms and came away a winner. The streak started in December 2005 when No. 1 Duke throttled second-ranked Texas as Redick scored what was a career-high 41 points.

The streak continued on Saturday as Texas wore all black and lost at Georgia 59-57 at Stegeman Coliseum in the Big 12/SEC Challenge. The Longhorns are now 0-4 all-time in the black Nike uniforms, having also lost to Kansas (2013) and Michigan (Dec. 6).

On the game’s final possession, Jarrett Allen’s turnaround jumper in the lane literally went in and out at the buzzer. The Longhorns fell to 8-13 on the season.

Andrew Jones had a team-high 16 points, and Kerwin Roach Jr. put in another 10 more. But Texas (8-13) was plagued by foul trouble and couldn’t get its outside shots to fall.

Jones hit a 3-pointer from the left wing with 1:20 remaining to make it a one-point game. Georgia’s Yante Maten answered with a difficult shot in traffic. It appeared Texas would get a last chance after J.J. Frazier missed with 10 seconds left, but Derek Ogbeide scored on the second chance, giving Georgia a four-point lead with 8 seconds left. Well, not so fast. After officials took a second look, it was determined the shot didn’t count as Georgia suffered a shot-clock violation.

After the timeout, Roach got the ball to Allen inside. The 6-foot-11 freshman had a terrific look. The ball just didn’t go down, helping Georgia (13-8) escape with a two-point win.

Freshman Andrew Jones is becoming one of Texas’ best players. He averaged more than 15 points in the last four games and started this one strong, too. Jones had seven points and six assists in the first half. He scored on back-to-back run-outs early to get the Longhorns going. He scored on a penetrating layup and drew a foul, giving Texas a 39-38 lead with 12:41 left.

On a day with Texas’ big men in foul trouble, the UT guards needed to carry the scoring load. It didn’t happen, at least not from beyond the arc. The Longhorns hit six of 20 shots from 3-point range.

Eric Davis Jr. has said before he needed to see the ball go through the hoop. He hit seven 3-pointers in the last two games and drilled two more in the first half against the Bulldogs. The Horns desperately need another outside scorer for the rest of the season, especially since Jacob Young is struggling.

Foul problems really hampered the Horns in the second half. Coach Shaka Smart trusted Allen to leave him in the game late in the first half, and Allen picked up his third foul. Cleare got whistled for his third foul just 10 seconds into the second half and eventually fouled out with 6:09 to play.

Texas (2-6 Big 12) reaches the midway point of league play on Wednesday with a home date against Texas Tech. Zach Smith had 25 points on Saturday as the Red Raiders won their Big 12/SEC matchup game against the LSU Tigers. Tech wasn’t shy about gunning for it, either. The Raiders were 12 for 23 from 3-point range.

Who would win the all-time matchup? Texas men versus Georgia

LOOK: Oklahoma breaks Big 12 trophy in attempt to transport it