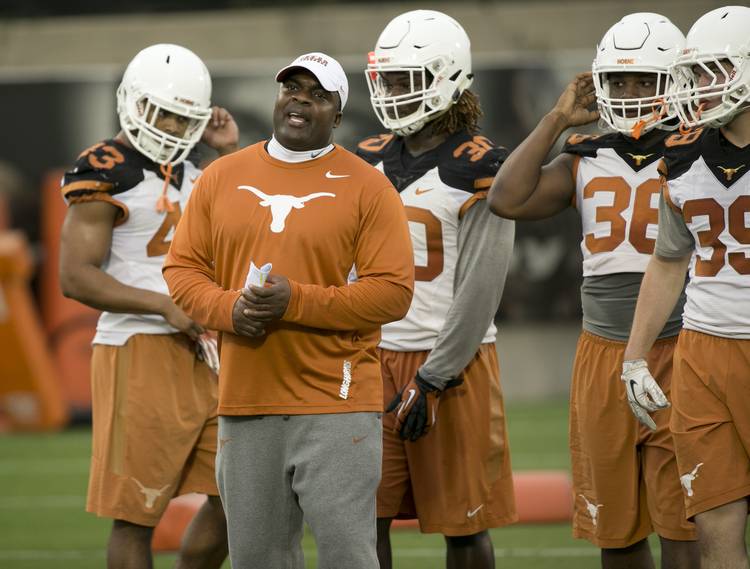 Whether led by Mack Brown or Charlie Strong, Texas been a force on the recruiting trail in recent years. Tom Herman is trying to ensure that trend continues and has put all the pieces in place to ensure it will.

Assistant coaches Stan Drayton (running backs) and Tim Beck (offensive coordinator) have particularly impressive track records when it comes to recruiting, and Herman himself has been a stalwart at his many coaching stops.

While Michigan coach Jim Harbaugh might beg to differ, a head coach rarely gets to develop a meaningful relationship with every recruit. Much of that responsibility falls on assistant coaches.

Here are five assistants of Texas past that the current coaching staff will hope to emulate. In at least one case, that shouldn’t be a problem.

RELATED: Golden: In 2005, Texas’ big uglies were a thing of beauty

Nunez holds the dubious distinction of being the first of Brown’s assistants to be let go. However, from the time Nunez arrived until UT decided not to renew his contract in 2003, he built a stockpile of great offensive linemen. Mainstays like Lyle Sendlein, Kasey Studdard, Justin Blalock and Jonathan Scott helped pave the way for Cedric Benson and eventually helped Texas win the 2005 national championship. Nunez also recruited All-American guard Derrick Dockery.

When Strong arrived in 2014, he decided to keep Chambers — a tight ends coach — as the lone holdover from Brown’s staff. Although he was fired after just one year with Strong, Chambers built a strong recruiting resume from 1998 to 2014. He landed five 5-star recruits from the time 247Sports began tracking recruiters. Those five were Sergio Kindle, Tray Allen, Mike Davis, John Chiles and Darius White. He was also credited with recruiting Hassan Ridgeway, Peter Jinkens, Chris Whaley, Tyrone Swoopes and many others.

What’s the difference between Oscar Giles in 2013 and Giles now? One of them should be that he has three more years of experience under his belt and even more relationships with high school coaches. He was one of the Longhorns’ best recruiters from 2005 to 2013 and became a major asset for Herman the past two seasons at Houston. Among the players he’s brought in: Jackson Jeffcoat, Malcom Brown, Tim Cole, Sam Acho and a 3-star named Earl Thomas.

Do you think they were handing out “Big 12 recruiter of the year” recognition back in the days of Darrell Royal? Not a chance. That’s OK, because now we have a much better understanding of who is behind teams’ success. ‘Success?’ you ask. ‘Weren’t the Longhorns a paltry 16-21 in three seasons under Strong?’ Yes, and Jean-Mary arrived and departed Texas with him. But if Herman wins right away, at least some of the credit will have to go to the former linebackers coach. The Longhorns roster is littered with players he brought in: Malik Jefferson, Shane Buechele, Jeffrey McCulloch, Poona Ford, Erick Fowler and more. According to Rivals, he was the lead recruiter on nine of UT’s 2016 signees.

A few months ago, as Texas was preparing to hire Herman, it got tweeted around that he could be bringing Brewster back to Texas with him. That created a bit of a stir, and for good reason. While it didn’t end up happening, Brewster — who is now the recruiting coordinator/tight ends coach at Florida State — is seen by many as the gold standard for Texas recruiting. And why not? He did land golden boy Vince Young and countless others during his short stay from 1998 to 2001: Cedric Benson, Derrick Johnson, Quan Cosby, Michael Huff, Cedric Griffin — all signed with the Longhorns in 2001.

That’s the type of core Herman is looking for.

Longhorns in the NBA: Through Jan. 26th

Who would win the all-time matchup? Texas men versus Georgia